This post was written by Warren Krafchik, Director of the International Budget Partnership, and cross posted on the Open Government Partnership blog. 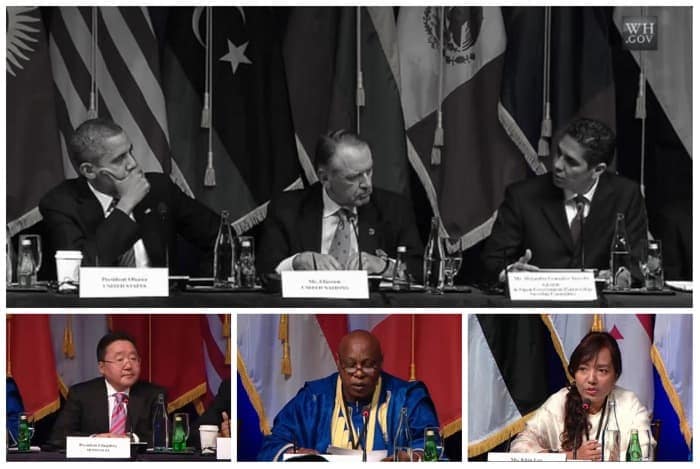 Earlier this week, on the fringes of the United Nations General Assembly, I was privileged to attend an extraordinary meeting. On the stage and in the audience were the presidents of the U.S., Mongolia, Liberia and several other nations, as well as the U.N. Deputy Secretary General and Special Rapporteur for the Right to Information, U.S. cabinet members, civil society activists from Burma, Kenya, Mexico, Zimbabwe and elsewhere, and heads of several major U.S. foundations. You get the picture. This was an influential gathering.

The last time a similar gathering took place was the launch of the Open Government Partnership in mid-2011 — where governments and civil society organizations committed to increasing open and accountable governance. A critical feature of OGP is the emphasis it places on strengthening the role of civil society in public policy setting, implementation, and oversight.

This time, however, this powerful gathering was focused on calling attention to an opposite trend — the widespread crackdown on civil society around the world. From the podium President Obama challenged those present to return to the U.N. next year with concrete proposals to address the situation.

In an alarmingly wide range of countries, activists are increasingly prevented from organizing, speaking openly, and receiving funding. In many cases, outspoken critics are jailed, and even tortured and killed, simply for speaking their mind. CIVICUS estimates that 57 percent of the world’s population live without access to basic political rights and freedoms. Civil society is facing efforts to tie its hands in both developing and developed, middle-income and low-income, and northern and southern countries. And, stable governments committed to democracy are not exempt — we are seeing civil society voices being stifled even in countries that are promoting open government as part of OGP.

A clarion call was issued at Monday’s meeting to “stand against restrictions on civil society.” The whole point of OGP is to empower the champions, to provide them with cover and support, so that we might help tilt the balance in favor of openness. But this is not enough. We need OGP and other initiatives to invest as much energy and attention into countering efforts to close spaces as we devote to opening them.

This is a reality check for OGP. While we celebrate our gains, we need to remember every day that opening government is vigorously contested terrain. In every country that is dedicated to opening spaces for civic engagement, there are forces equally as intent on closing them. OGP must face the risk that this could seriously undermine this initiative, which relies on civil society participation to succeed. We must focus on raising minimum standards across OGP countries, in addition to supporting and promoting new best practices in civic engagement.

So, what additional actions can OGP take to ensure that countries live up to this ideal across all of their actions, not only in specific OGP commitments?

While none will be easy — we do have options.

First, we can ensure that the minimum practices that are required to enter OGP are not sufficient for a country to stay in OGP. At present, countries are required to meet only a proportion of the eligibility criteria. We could stick with this rule to ensure diversity in participating countries, but we should also require countries to meet all of these criteria (including the criteria on civic space) by the end of their first action plan. In fact, we should go even further and require countries to meet a more ambitious set of criteria in subsequent action plans in order to meet the standards of the initiative.

Option two is to reopen the discussion within OGP about what further action OGP can take where member countries seriously undermine civic space, for example through restrictive NGO laws. At present, a country may be suspended from OGP if it no longer meets the eligibility criteria, or if it receives two consecutive poor reports from the Independent Reporting Mechanism. With the benefit of hindsight, it is important to discuss whether we can agree on a red line on civic space that would trigger diplomatic engagement, if necessary leading to possible suspension of a country from OGP. The red line would signal that the basic enabling conditions for civil society to operate and citizens to participate have been violated, even if the country continues to meet the eligibility criteria.

In the case of countries that may or do cross the red line, the first step is for members of the OGP Steering Committee to start a conversation with the leadership of the country. This diplomatic option has been used effectively in OGP previously, through meetings of the full Steering Committee or bilateral conversations between countries. So we have some experience to draw on. However these types of conversations are more likely to be effective if they are backed by the stronger sanction of suspension.

This is not a discussion that can wait. The OGP Summit at the end of October in London will have these issues firmly on the agenda, with a view to identifying practical measures to stem the tide against openness. To ensure that OGP has a vehicle to take the London discussions forward, it should as soon as possible set up a high level task force to approve a robust set of recommendations by mid-2014. Meeting this challenge will allow OGP to return to the U.N. annual meetings in 2014 to continue leading the charge towards more open, accountable, and responsive government.

Photos and video courtesy of The White House