This post was written by Bernhard Krabina, a researcher, consultant, and trainer at the Centre for Public Administration Research (KDZ) in Vienna, Austria. His main areas of work are open government, public governance, and knowledge management. You can find him on Twitter @krabina.

Public availability of municipal spending data is nothing new in Austria. But despite the existence of an Austrian Open Government Data portal (http://data.gv.at), local budget data is not entirely accessible. Data is often locked up in PDF documents, and thus not machine readable, which makes it more difficult to use in analysis or for the creation of data visualizations. But now, spending data for Austria’s municipalities is only a click away.

The Centre for Public Administration Research (KDZ) is an NGO in Austria with sound knowledge of public finances. In a project funded by the Bank Austria, KDZ recently launched the portal www.offenerhaushalt.at that provides access to the spending data of all 2,356 municipalities in Austria. However, it is the responsibility of each municipality’s mayor to publish the budget data via the new portal.

In Austria, the municipalities have to report their budgets to the federal states, who deliver these reports to Statistics Austria, a website that provides political, social and economic information, where they are aggregated and quality checked. An electronic dataset of all the spending data can be purchased at Statistics Austria, who agreed on making this data publicly available on the portal with the consent of the municipalities. Therefore each mayor has been sent login credentials enabling him or her to view and explore their own municipality’s spending data from 2001 to 2012. The portal also includes interactive visualizations. The login credentials can also be shared among members of the administrative departments or the municipal council. With a separate administrative account, the mayors can, with a few clicks, publish all data and visualizations on the portal for everyone to see and use.

More than 500 municipalities have already logged in to the portal and about 10 percent have made their data public, from the city of Salzburg to the small community of Engerwitzdorf. And more join in every day.

The new portal makes it easy for both local government officials and citizens to understand municipal budgets. Three types of visualization are presented alongside raw data sets for each year in a standardized format, making reuse of the data easier than ever before.

The platform was developed using open source software (Drupal, D3.js) and further functionality will be developed in 2014. 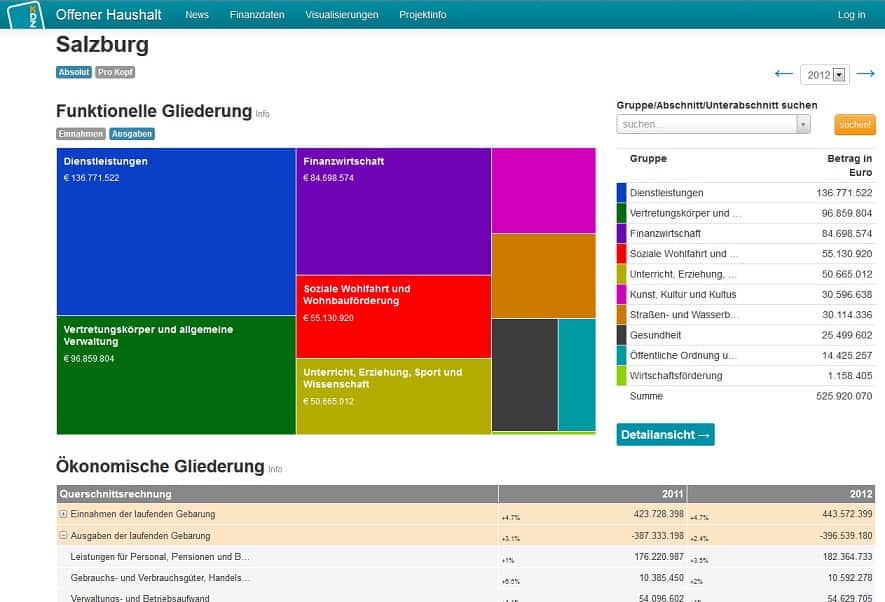 Figure 1: Typical treemap visualization of the functional classification of the budgets (according to topics like services, education, culture, etc.). Income and expenditure can be selected to be displayed in the treemap for each year, either in total or per capita. The specialty of the treemap is that the colors don’t change according to the size of the area, but stay the same for each of the topics they represent among all municipalities, which makes it possible to better track the development (i.e. pink is the cultural budget in every selected municipality). Below the treemap is the economic classification of the budgets, showing the type of incomes and expenditures (e. g. personal, operational, financial) for the level selected in the treemap. 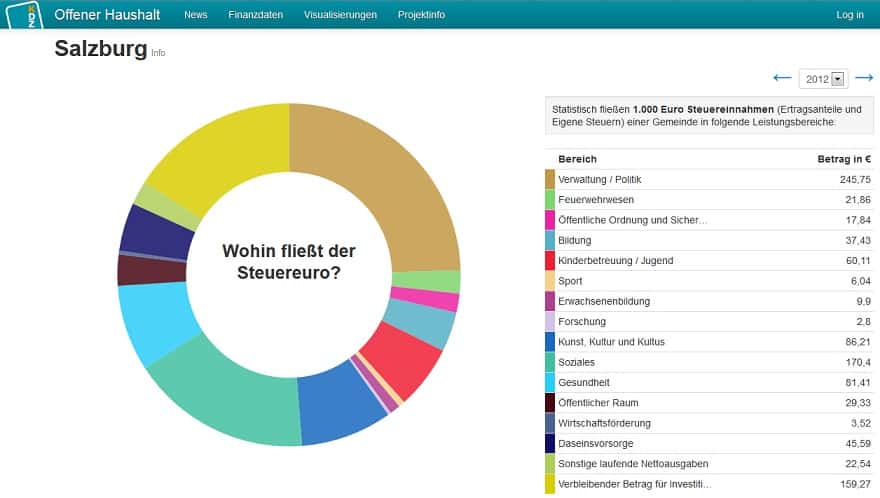 Figure 2: Where do 1,000 euro of tax money go? This visualization takes only the values from the ordinary budget where the expenditure exceeds the income. It calculates what parts of 1,000 euro of tax money of a municipality have been invested in different areas. The structure does not exactly follow the legal structure of the budget data, but provides more user friendly categories (e. g. putting “child care and youth” up front, whereas in the legal classification it is in two separate subheadings.) This visualization cannot be used to compare data among municipalities, but it shows in what areas the available tax money was spent.