This post was written by Paolo de Renzio, Senior Research Fellow at the International Budget Partnership

ODI’s 2013 CAPE Conference “Budgeting in the Real World” will be streamed live on 13-14 November. Sign-up to participate online and tweet your questions and comments to #CAPE2013.

As Rudolf Goldscheid, an Austrian sociologist of the early 20th century, memorably put it, “the budget is the skeleton of the state stripped of all misleading ideologies.” Anybody interested in studying, analyzing, and monitoring government policies would do well to follow Goldscheid’s insight, and start from the budget.

Through government budget processes and systems, political manifestos and strategic plans are turned into concrete policy proposals with specific resource allocations, funds are raised and spent, and public services are delivered. Though it is sometimes easy to get lost in the numbers and the technical jargon that characterize government budgets, those who spend time digging through voluminous budget reports often find that they are much more interesting and useful than they look.

At least that’s what we think at the International Budget Partnership (somewhat unsurprising given our name…!). What most of our work focuses on, however, are some key aspects of government budgeting. First, we put a lot of emphasis on budget transparency and openness, looking at the degree to which governments across the world provide detailed and timely budget information to the public, in order to open up space for a meaningful dialogue on policy priorities and government action. We work with independent researchers in 100 countries to produce the Open Budget Survey every two years, and we use its results for both research and advocacy, at the international and country level. Second, we provide support to specific civil society campaigns in a variety of countries, building CSO (civil society organization) capacity to use budget information, engage with the budget process, and influence budget policies. 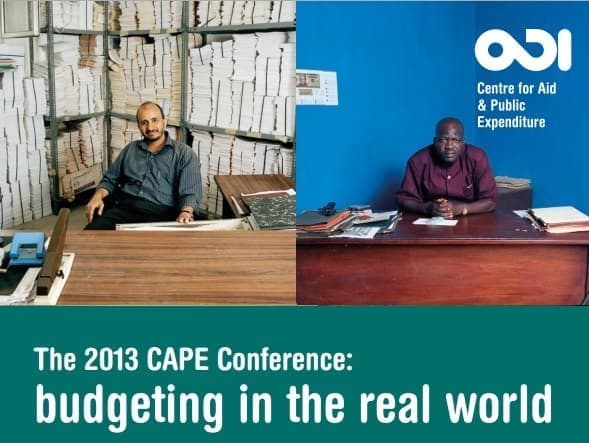 Inevitably, there is much more to government budgeting than just that. For the budget to work as an effective policy-making tool, many other components need to be in place. Among these: a) technical capacity within government, both at the ministry of finance — where macroeconomic forecasts and broad budget projections are put together — and in the line ministries where detailed proposals are developed; b) appropriate systems for recording and reporting on how public resources are spent; and c) strong internal and external accountability mechanisms, through parliaments and audit institutions, to ensure that the executive’s power is kept in check. And besides all of the above, the inherent political nature of budgets and budgeting needs to be recognized, given that when scarce resources need to be allocated, the powers and interests of different actors inevitably come into play.

One of the the Overseas Devleopment Institute’s conferences this year — the 2013 CAPE Conference: Budgeting in the Real World — will explore these issues in detail. The event will bring together policy makers, international agencies, academics, and practitioners involved in international efforts to strengthen budgeting systems worldwide to look at how governments budgets actually work in practice.  As the conference framing paper states, “Real-world budgeting can have multiple meanings. First, it evokes an idea of budgeting that is messier and more political: a broadening of scope. Second, ‘real world’ suggests a focus on budgeting as it actually happens, as opposed to how it should be: positive instead of normative. Finally, it is a call for more realistic approaches to budgeting that take greater account of what can be achieved given a particular institutional and political setting and capacity endowment.”

Sessions will look at the key drivers of the practice of budgeting, at the role of finance ministries, at the role of reformers in budget reform processes, and at the linkages between budget reforms and development outcomes. I will contribute to this final session, building and reflecting on some of the work we have done at IBP recently on when and how budget transparency leads to accountability — see our Open Budgets book — and looking at case studies of successful civil society engagement in budget processes. It should be an exciting two days. For those interested, the whole conference will be streamed live . . . come join us!