This post was written by Zoran Ivancic from the CPI Foundation.

Some 20 years after the Bosnian war of the 1990s, Bosnia and Herzegovina remains a fragmented society, known for having one of the most complex systems of public finances in the world. Tiny and poor, Bosnia carries a burden of five layers of government and 14 separate budgets for the central government, each under control of different parliaments and ministries of finance. Additionally, there are three different systems of salary taxation. These complex systems make it difficult for citizens to understand how the government is raising and spending public funds and to engage and participate effectively in budget decisions and processes.

In an effort to foster better understanding of Bosnia and Herzegovina’s budget systems, the portal budzeti.ba was launched on 30 October 2013. The website is a joint project of Bosnian civil society advocates the CPI Foundation (Public Interest Advocacy Center) and the Open Knowledge Foundation. (CPI is an International Budget Partnership partner in Bosnia and Herzegovina.) The portal allows Bosnian citizens to navigate the complexities of the country’s tax system and to explore the distribution of public funds across administrative regions and categories of social spending. Budzeti.ba is designed to make public budget information accessible to every Bosnian citizen. Users can inspect the details of national spending on categories like health and education through a simple point-and-click interface, and they can drill down into regional spending priorities by clicking through an interactive map. The tax calculator feature allows Bosnians to learn how much they contribute to public services and where their money goes by specifying their home region and monthly income. The desire and utility for a website like this was obvious when budzeti.ba attracted more than 20,000 visitors in the first couple of days of its launch and garnered media attention and coverage. 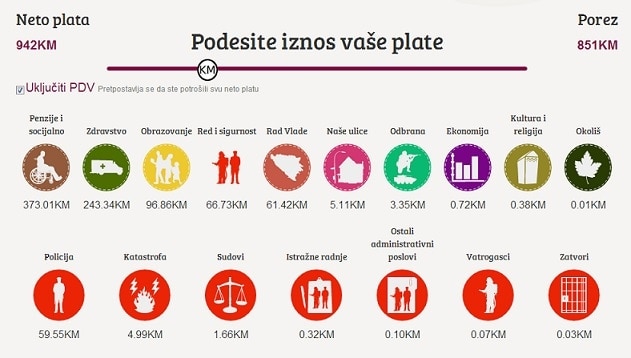 This is the first time that public spending has been presented to the public in a functional classification system. Before budzeti.ba, all budget reporting had been presented in a very dry and technical manner, making it difficult for the average citizen to understand and engage with the information. The absence of a Citizens Budget only amplified the situation. To address this issue, the website was designed so that no specialized knowledge is required to use the site or to understand its intuitive presentation of budget information. A new calculator feature is being tested in a focus group to make the site even more user friendly and easier to understand.

Data for budzeti.ba is taken from several sources, including government websites and the Official Gazette of Bosnia and Herzegovina. Since Bosnian tax authorities do not publish their three different calculation methods, the developers of the site worked with accountants to estimate this information.

The data included on the site on its initial launch is from 2012 and will continue to be updated as new information becomes available. CPI intends to deepen budzeti.ba’s regional coverage by including municipal data and to enrich its analysis of government spending with data from the Open Budget Survey, infographics on debt and deficit, and more.