A recent court decision allowing the city of Detroit to enter into bankruptcy underscores the fact that U.S. local governments are not fiscally invincible. Although local government insolvency in the United States is rare, its impact on residents, employees, pensioners, and creditors can be quite severe. Thus it is useful to know which local governments are most at risk of insolvency so that fiscal crises can be better anticipated — or perhaps avoided. So, we at Public Sector Credit Solutions recently sought to evaluate the risk faced by local governments in California.

One approach to analyzing government insolvency risk is to gather and analyze financial data from a large number of public agencies. Ratios and other metrics associated with past fiscal crises can be used to rank and even score governments’ risk today.

Budgets could be a source of this statistical data. Just about all U.S. local governments produce budgets, and it is theoretically possible to collect and compare all of these documents. Unfortunately, there are some high hurdles to doing this. First, there is no national repository of local government budget information, so collecting the budget documents is a challenge.  Worse, there is no national standard for budget reporting, and so the budgets of any two governments are not necessarily comparable.

In the U.S. most sizable subnational governments are required to file audited financial statements in addition to budgets. Many (but not nearly all) of these audits are warehoused by the Municipal Securities Rulemaking Board, which promotes a fair and efficient municipal market and market transparency. Also, these statements usually meet requirements set by the Governmental Accounting Standards Board, which sets and improves standards of state and local governmental accounting and financial reporting. Consequently, it is much more practical to compare audited financials than budgets. So, while audited statements are not forward looking, they actually provide a better basis for fiscal comparison across governments.

Earlier this year my group, Public Sector Credit Solutions, collected fiscal statistics from audited financial statements for over 300 California cities and counties.  Our work was supported first by a grant from the California Debt and Investment Advisory Commission and then by a Sunlight Foundation OpenGov grant. We published the data, links to source documents, and credit scores for each local government at http://www.publicsectorcredit.org/ca. The credit scores, stated in terms of a one year probability of default, are usually low – given the general safety of U.S. municipal bonds. However, there is substantial variance among local governments, with the cities of Atwater, Compton, Monrovia, and Ridgecrest being most at risk. 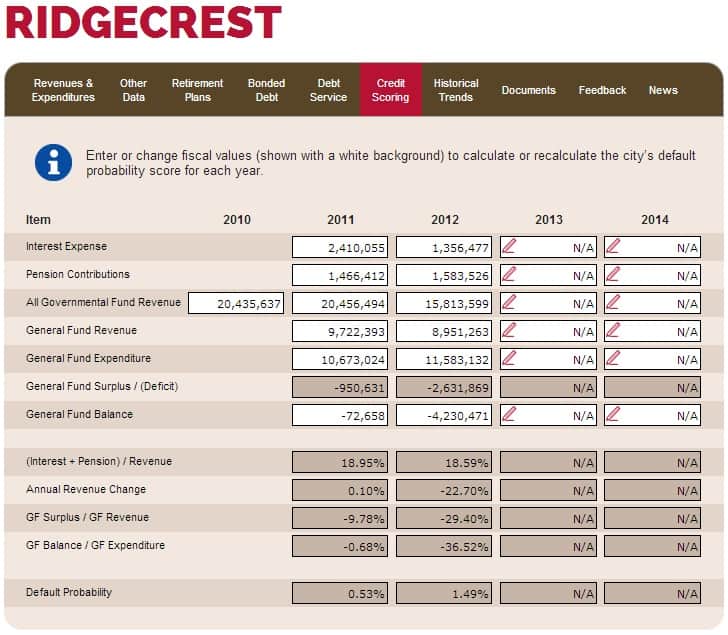 Aside from comparing credit scores users can also see each city’s revenues and expenditures by category. This facilitates a comparison of spending priorities, but we will have to add the ability to view data for multiple governments on one page to make these comparisons easier. Usability enhancements and an extension of coverage to states outside California will require additional funding.

We encountered numerous challenges in compiling the financial statement data. Some local governments do not post their financial statements, so it was necessary to contact them — and, in a few cases, file Freedom of Information Act requests — in order to obtain their audits. Virtually all of the audits came to us in PDF form rather than a more accessible format that would allow for easier data extraction, comparison, and analysis. To extract the required financial data, we had to employ a mixture of technology and brute force data entry.

As I recently suggested in a California policy blog, the task of government financial analysis would best be served by the adoption of XBRL (eXtensible Business Reporting Language) for public sector financial reporting. XBRL files are considered “machine readable” in the sense that their data can be readily harvested and copied into an analytical database. In the longer run, standardization and XBRL reporting of budget data would enable researchers to make effective use of these forward-looking documents and thus provide the public with more informed early warning signals of impending government insolvencies.