¿Dónde Van Mis Impuestos? (Where Does My Money Go?): How Political Will Can Answer This Question

This post was written by David Cabo, Director of Fundación Ciudadana Civio

When we started ¿Dónde Van Mis Impuestos? ­– the Spanish version of the Open Knowledge Foundation’s Where Does My Money Go? (a website that graphically “visualizes” how tax money is spent in countries around the world) – in December 2010, the platform quickly became the model for tax visualization in Spain. This is true even though the platform presents only a high-level summary of the national budget. However, there is no other similar resource in Spain, which demonstrates both the scarcity of publicly available and accessible information about public expenditures and that we have a long road ahead of us in terms of open and accountable budgeting. 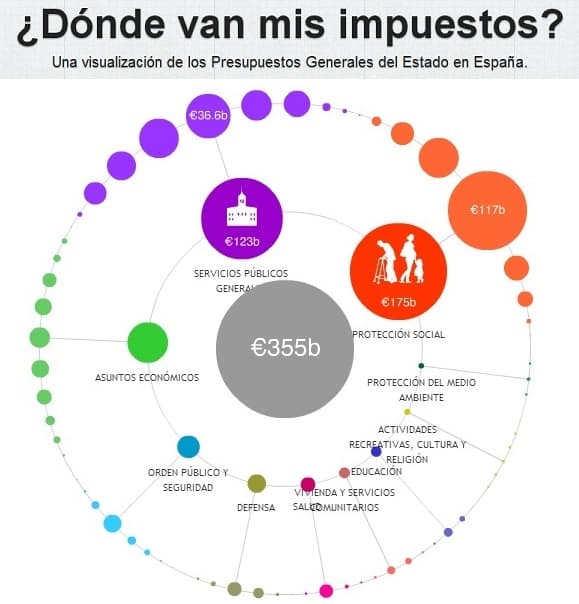 Thanks to the kick start the platform provided, as well as the public’s interest in public spending information, the regional governments of the Basque Country  and Aragon decided to take a concrete step forward and hired our lead developer to create custom tax visualization projects for their regions. With the help of these governments, and the subsequent ease in accessing the required information, we were able to create two new versions of the tax visualization platform (one for each region) that greatly improved upon the original project. These websites display not only where the government spends the money but also its revenue sources. The sites go even further to include a comparison of budgeted and actual expenditures, and they allow citizens to track where every cent of their tax money goes. The Aragon site includes updated budget information as soon as it’s available, and we are working on extending its coverage to the county and municipal levels. This level of information was only possible because the two administrations made the information public.

With this experience behind us, we now want to improve ¿Dónde Van Mis Impuestos?, the national-level website. Although we have been able to adapt and improve upon the platform for the Aragon and Basque Country sites, there is one feature of those sites that we will not be able to reproduce on the national site without the cooperation of the Spanish government —the budgeted vs. actual spending of public money. The breakdown of actual central government expenditures currently available to the public is completely inadequate — much worse than the breakdown of budgeted expenditures — which makes a comparison between the two impossible.

The problem, apart from technological issues related to file formats and data standards, is the lack of political will to clearly inform citizens about where and how much the government actually spends. In Spain the focus is on budgeting, which in many departments is nothing more than a piece of paper cluttering a desk or two (for example, every year the Ministry of Defense spends a minimum of more than one billion euros beyond its budget).

In the middle of an economic crisis in which citizens scrutinize every detail of public spending, wouldn’t it be more effective for the government to make this data public in a detailed and straightforward manner?  Or at the very least permit others to do so? Knowing the complete details of official budgets (without the interference of intermediaries who present data on a few select issues in isolation from the entire budget picture) could help the public understand unpopular spending cuts. For instance, if you take into account the reduction of certain payments and are aware of cuts in pensions, health care, and other fundamental services, perhaps you would be more understanding of the spending cuts in other areas that are not basic necessities.

For all this to occur, Spain’s political leaders must respect citizens and allow them to participate in the business of public spending. It’s also essential for citizens to actively participate. At the end of the day, accomplishing these goals is our raison d’être, and our work on ¿Dónde Van Mis Impuestos? aims to drive the discussion and action to make it happen.