The Hidden Corners of Public Finance: Where Can CSOs Look, and for What?

This post was written by Paolo de Renzio, Senior Research Fellow for the Open Budget Initiative

Budget transparency, the mantra goes, is key for citizens to hold governments accountable for how they spend public money. But what if public spending does not happen through the budget, or if a good share of public resources are not captured in budget documents? Time and time again, the Open Budget Survey has shown that many governments keep certain corners of public finance hidden from public view. Questions in the Open Budget Survey that are linked, for example, to extra-budgetary funds, state-owned enterprises, and other similar activities consistently score very low, highlighting a problem that an increasing number of civil society groups are becoming aware of.

In Angola, for example, vast sums of money have been spent outside of the official budget process through Sonangol, a state-owned oil company. Sonangol engages in a number of so-called “quasi-fiscal activities” on the government’s behalf, including providing fuel subsidies and contributing to the servicing of the national debt. In many countries, tax incentives and concessions are used by governments to stimulate activity in certain sectors of the economy. The tax revenue that is forgone from such arrangements often amounts to more than 10 percent of total revenue. Yet little or no information is publically available on why they were originally granted, how long they are supposed to last, and how much they cost the public purse.

To cast some light on what we have called the “hidden corners” of public finances (see figure below), the IBP has embarked on a project to look at how some governments — chosen among those that perform better on the Open Budget Index — have set up reporting requirements and transparency practices on extra-budgetary funds, tax expenditures, state-owned enterprises, and quasi-fiscal activities. Eight country case studies were commissioned to gain a better understanding existing practices in these four areas, and help to define the basic pieces of information that governments should make publicly available to allow for independent monitoring and enhance accountability.

Figure: The public sector, its components, and the “hidden corners” 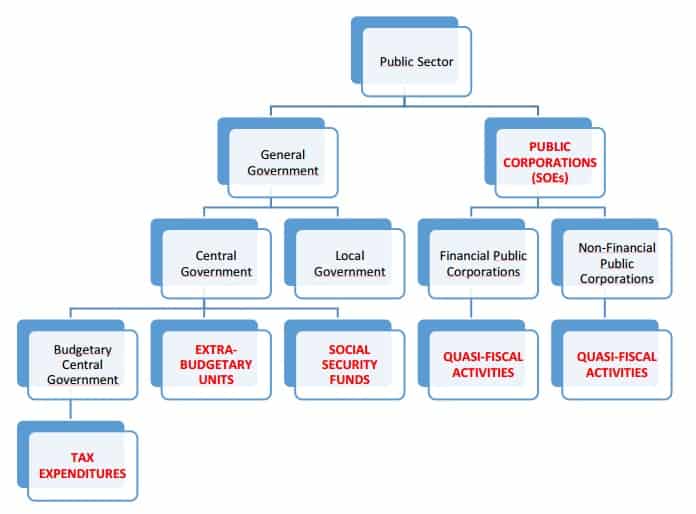 The case studies reveal a wide variety of country circumstances and approaches. In a number of cases it is possible, by looking beyond the key budget documents that the Open Budget Survey focuses on, to gather extensive amounts of information on these areas of public finance. Many of the governments of the countries we studied approve laws and publish reports that allow for a reasonably detailed picture of government-funded activities and operations beyond the core budget to emerge. These take the form of annual reports published by state-owned enterprises, special appropriation laws for extra-budgetary funds, and tax expenditure reports, among others. Some areas, such as quasi-fiscal activities, remain more difficult to detect and monitor, and some extra-budgetary institutions are still not reported on in any detail.

Civil society groups and other actors interested in monitoring government activities and operations in these areas can use the report and the case studies as a resource to gain a better understanding of some of the issues involved, some of the innovative practices that exist around the world, and some of the key topics to look into if they decide to investigate these areas in their own countries. The Annex of the report presents a more detailed checklist of the types of information that governments should make publicly available, which could serve as a basis for advocacy campaigns asking for more transparency around the hidden corners of public finances.