Supreme Audit Institutions (SAIs) are crucial government bodies that verify whether public money is being used effectively and lawfully, and assess whether the fiscal information being produced by governments is complete and reliable. Despite being fundamental to a well-functioning budget system, most citizens have a limited understanding of their role and functions.

Since 2006, the Open Budget Survey (OBS) has sought to measure the role and effectiveness of SAIs and their contribution to more accountable budgets. In this blog we examine the strengths and weaknesses of oversight institutions based on the data from the latest round of the Survey.

The State of Public Auditing: Results From the Open Budget Survey 2015

The OBS 2015 found serious shortcomings in the conditions of how SAIs in many countries operate and report their findings. For example, a large number of SAIs lack independence from the executive government – the prime targets of their audits. This problem is particularly prevalent in the Middle East and North Africa (MENA) and in Sub-Saharan Africa, where the head of the SAI in many countries can simply be removed by the government without the approval of the legislature of the courts (see Figure 1).

The 2015 Survey also uncovered a lack of transparency in audit findings. In more than a third of the countries surveyed (35 of 102), audit reports are either not made available to the public or are published too late to have an impact. Countries in MENA and Sub-Saharan Africa are again the weakest performers: eight out of 10 MENA countries and 15 out of 27 Sub-Saharan Africa countries failed to publish audit reports within 18 months of the end of the budget year.

Legislatures in almost half of the countries surveyed (49 countries) did not hold public hearings to review audit reports. And more than half (55 countries) failed to publish a report tracking follow-up actions on audit reports. This means that, in a great many countries, the public is kept in the dark on both the findings of an audit and what the government is doing to address them.

It all Starts With Publishing the Audit Report

Results from the OBS 2015 reveal a strong link between making audit reports publicly available and other measures for improving the transparency and accountability of the audit system. Indeed, the data show that countries that publish audit reports are more than twice as likely to hold public discussions on audit findings and almost six times as likely to publish reports on corrective actions taken by the executive (see Figure 2). This makes it even more important that countries that are currently not publishing their audit reports take this first step towards bolstering the accountability system.

Are Legislatures Filling the Gap?

The OBS 2015 findings show that SAIs in many countries have not lived up to their potential to be an effective protector of the public purse. While weaknesses in SAIs are an important limiting factor, external factors can often play an equally important role in diminishing the impacts of audits. For example, most SAIs cannot use their findings to directly sanction governments or compel executives to take action. Instead, they typically submit their audit reports to legislatures, which are then responsible for using these reports to hold executives to account.

One of the measures we working to add to the OBS is an assessment of how legislatures use audit reports and how they interact with SAIs in this process. In the meantime, assessments conducted by the Public Expenditure and Financial Accountability (PEFA) program can help shed light on this issue. PEFA reports are available for 59 countries assessed in the OBS 2015. These reports reveal that legislatures are not effectively overseeing audit reports submitted to them. The main findings include the following:

Ultimately, an important indicator of a well-functioning auditing system is that it produces findings that result in positive changes. Taken together, the OBS and PEFA point to three ways that executives’ accountability for the findings of SAI audits can be improved in different regions: 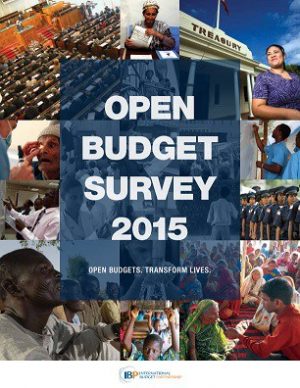 Findings from the Open Budget Survey 2015 reveal that the vast majority of people live in countries that have inadequate systems for ensuring accountable budgets. Learn more: