by the <a href="https://internationalbudget.org" target="_blank">International Budget Partnership</a>

On 6 October 2016 the International Budget Partnership (IBP) and the French Ministry for the Economy and Finance co-convened a high-level event on budget transparency that brought together Ministers of Finance and senior finance ministry officials from eight Francophone African countries (Benin, Burkina Faso, Cameroon, Côte d’Ivoire, Democratic Republic of Congo, Mali, Republic of Guinea, and Senegal).  The meeting was held on the side lines of the World Bank/International Monetary Fund Fall Annual meetings with the aim of discussing recent progress on budget transparency in the region and encouraging participating governments to make policy commitments to further deepen transparency reforms. The meeting took place as France assumes the government co-chair of the Open Government Partnership (OGP) and prepares to host the Open Government Summit in Paris from 7th to 9th of December.

Participants also included the commissioners of two of the most influential regional monetary unions (the West Africa Economic and Monetary Union [WAEMU] and the Central African Economic and Monetary Community [CAEMC]), senior leadership from the World Bank and the International Organization of La Francophonie, the Director General of the Agence Française de Développement or AFD (the French Development Agency), and representatives from BNP Paribas Investment Partners and the OGP. The roundtable discussion was moderated by Anne-Marie Descotes, Director-General in the French Ministry of Foreign Affairs and International Development. 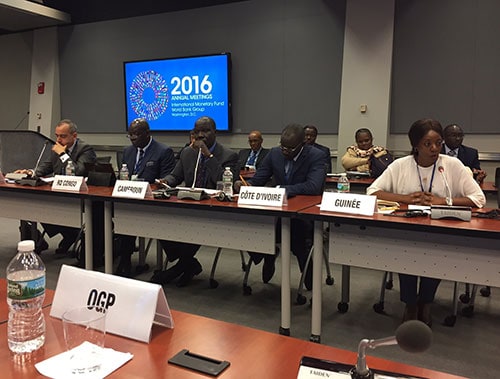 Finance ministers from four countries in Francophone Africa discussed the latest efforts to advance budget transparency reforms in their countries and explained some of the challenges that they are encountering in sustaining the pace of reforms. The Finance Minister from Cameroon, Alamine Ousmane Mey, presented steps being taken to improve financial management in the country, including the publication of information of interest to investors and citizens. His counterpart from Senegal, Finance Minister Amadou Ba, detailed recent improvements in spending and debt management in Senegal. The speakers also noted the challenges they face in producing statistics and the limited capacity of various entities in their countries to manage public finances, especially at subnational levels of government. They welcomed support from technical and financial partners to strengthen the capacity of states and communities to strengthen their fiscal governance practices.

Giving evidence for the role regional and international bodies can play in promoting fiscal transparency, the participants recognized that progress in Francophone Africa was spurred by a set of transparency directives issued by regional monetary unions.

The Commissioner of the WAEMU, Abdallah Boureima, and Commissioner of CEMAC, Paul Tasong Njukang, shared key provisions on budget transparency contained in their directives on public financial management and the status of implementation by member countries. Similarly, Moncef Follain from the International Organization of La Francophonie emphasized that the organization was considering an agenda that promotes budget transparency among its members.

With regard to the challenges of implementing transparency reforms, Warren Krafchik, Executive Director of IBP, spoke on behalf of the OGP and invited Francophone governments to join OGP’s Fiscal Openness Working Group, a powerful peer-learning network, convened by the Global Initiative for Fiscal Transparency (GIFT).

During the discussion, meeting participants explained that Francophone countries are at a pivotal point in their transparency practices. Despite the dramatic improvements, countries in the region have not yet implemented the kinds of transparency practices that would enable them to reap the full investment and equity benefits associated with high levels of budget openness. To achieve such levels of transparency, countries in the region will need to implement expansive reforms to enhance the quality and comprehensiveness of published budget data.

In this context, initiatives like the OGP and the Fiscal Openness Working Group can provide forums in which Francophone African governments can demonstrate their commitment to deepening transparency and accountability and engage in peer learning with other countries in Africa and the world. On 7 December 2016, the next OGP Summit will be held in Paris. The French government and IBP are planning to host a panel on innovations in open budget practices at the summit to provide an opportunity for Finance Ministers of Francophone countries to commit to a set of deeper transparency reforms.

Concurrently, IBP has begun discussions with a network of civil society organizations in Francophone Africa to build their capacity to analyze the newly available information to engage in budget-related discussions in their country.  This is an exciting and very timely development that may enable civil society groups in the region to maximize the expanding opportunities for them to engage with their governments on budget policies and practices that could help mitigate poverty.