Accountants With Opinions: How Can Government Audits Drive Accountability?

The International Budget Partnership (IBP) recently convened a group of leading experts and practitioners from the field of government auditing to discuss how to make audits more impactful. The event brought together luminaries of the auditing world, including the heads and former heads of the supreme audit institutions (SAIs) in India, Kenya, Korea, Nepal, and the Philippines, together with representatives from civil society, academia, bilateral donors, and international development banks.

Auditors have one of the toughest jobs in government: ensuring that powerful politicians, officials, and institutions are held to account. They painstakingly comb the books for evidence of corruption, malfeasance, and ineptitude, reporting on their findings to drive improvements. In this way, SAIs are essential to accountable governance. Yet, as the Open Budget Survey has revealed time and again, SAIs face serious limitations in many countries. Audit reports are withheld from the public, hearings on audit findings take place behind closed doors, and findings are not acted upon. Many of these problems stem from SAIs lacking the requisite independence to do their jobs effectively.

Given the potential of these institutions to drive more accountable governance, IBP wanted to bring together experts and practitioners to identify challenges, devise solutions, and discuss practical steps for taking these forward.

What Needs to Change? 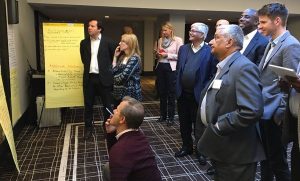 While recognizing that government auditors face a host of roadblocks particular to their country contexts, the participants identified a number of challenges common to many SAIs around the world. Alongside sharing these challenges, the group drew on their experience to discuss ways they could be overcome.

Many agreed that the findings of audit reports often go unheeded by the powers that be. To tackle this SAIs need to get better at connecting with other players in the accountability ecosystem. This includes legislatures, which are often the first to see audit reports; anti-corruption agencies and other official bodies that need to act on audit findings; along with civil society actors and journalists, who can bring findings to wider public attention and help to ensure that reports don’t get buried. One participant pointed out the potential of establishing cross-government working groups to break down silos and ensure audit findings were acted on.

Communications was identified as another area that SAIs could stand to improve. Engaging the media and the public in their findings was seen as key to pushing the government to act. If and when an SAI uncovers a grand case of official corruption, coverage in the media and public outcry is often assured. But audit findings that point to more mundane inefficiencies or ineptitudes can often pass unnoticed. Such findings are crucial for driving the incremental improvements in government functions and services that could make a real difference to people’s lives.

In addition to issuing individual audit reports, SAIs also need to learn how to communicate their role and responsibilities better. There is a need to firmly establish in the public consciousness the importance of their independence and objectivity, as well as the crucial part they play in driving better governance. If more people understand what SAIs do, more will to come to their defense when the targets of their audits turn up the heat.

On the technical side, SAIs need to be smarter at linking their reports with other decision-making processes, particularly those related to government budgets. A report that uncovers deficiencies in the education sector won’t have the kind of impact it should if the budget priorities for education have already been set. There are also gains to be made by linking their audits to global agreements and institutions, such as the Sustainable Development Goals (SDGs) and the Open Government Partnership (OGP) commitments in their country action plans. These could prove to be crucial entry points for auditors to use their findings to point out the government initiatives that are not on track.

Some Practical Ideas for Improvement

Participants were keen to establish practical steps that could be taken to improve the effectiveness of SAIs. At the international level, one idea is to establish a body made up of former SAI senior officials to engage with relevant global agreements and international institutions. Such a body could point out how essential the audit function is to realizing the aspirations of, for example, the SDGs and OGP commitments, and push for SAIs to be considered a more serious player in this arena.

Participants also pointed out that regional and international networks of legislators and auditors (such as the Inter-Parliamentary Union and the International Organization of Supreme Audit Institutions) could be useful for drawing attention to the issue of audit findings not being acted upon. Many also agreed that international organizations should produce more research and guidance on how SAIs can better approach engaging with external stakeholders and communicating with the public.

At the national level, participants suggested that SAIs could launch public awareness campaigns that raise the profile of their audit reports and educate citizens about the role they play in keeping governments on track. Such a campaign could be built around a database that tracks what the government is doing to address audit findings. Another idea was to establish an annual “Accountability Day” that looks back at recent government performance around the time the government announces the subsequent year’s budget. To help build relationships and connect the dots between various players, groups of CSOs, journalists, legislators, and anti-corruption officials could be established to tackle specific problems identified in audit reports and keep important issues on the agenda.

From IBP’s side, we’ll be building on the success of the meeting to explore how we can help turn these ideas into realities. Alongside a series of blogs that delve deeper into the audit function, we are working on a concept note that draws on the discussion to establish concrete steps for improvement. We’ll also be looking at ways we can work with our civil society partners to make better use of audit findings and forge stronger relationships with auditors.