This post is from “That’s How the Light Gets In”: Making Change in Closing Political Environments – a collection of essays that examine evidence of how to pursue fiscal accountability in a tougher political environment. The collection is a companion to IBP’s 2016 Annual Report. Read more essays from the collection on the Open Budgets Blog here.

Since the International Budget Partnership’s (IBP) founding in 1997, civil society organizations (CSOs) have made substantial progress toward opening budgets and budget processes. But their ability to use budgets as a tool for transforming lives has often been constrained by a conventional paradigm in which the size of the budgetary pie is fixed and, when crisis hits, the default response is to cut spending rather than increase the revenues needed to support basic services. 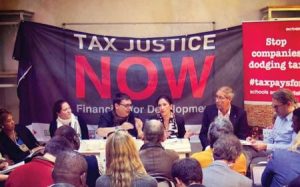 The heart of the issue is that taxes provide the resources that governments need to meet the needs of their citizens. And, throughout most of the developing world, tax collections remain below that which is needed to support basic services and foster development. As civil society budget work has strengthened, activists increasingly find progress stymied by a lack of public resources and are forced to defend hard-fought gains during times of fiscal stress. By linking the two sides of the budget — expenditures and revenues — tax work can potentially transform debates over public services from what is possible within existing resources to what is needed to address poverty and inequality. Work around tax and other revenue issues may also expand the range of alliances across the fiscal and general transparency and accountability field, leading to a stronger collective voice and more powerful advocacy.

Against this backdrop, IBP surveyed the tax policy and advocacy landscape, particularly that in developing countries, to assess whether there was scope to strengthen civil society’s capacity to engage in efforts to build robust and equitable tax systems at the country level. With near unanimity, stakeholders ranging from donors to civil society partners and researchers saw a clear role for IBP. In addition to our strong partnerships across the developing world and capacity to participate in both high-level technical policy debates and civil society advocacy, IBP is able to place taxation in a broader fiscal justice continuum that deploys a full set of tools toward the goal of achieving a more equitable allocation of public resources.

While stakeholders envisioned a clear and important role for IBP, they also underscored the magnitude of the challenge. Though several of IBP’s partners have engaged in revenue-related work, most of our partners concentrate their efforts on transparency and public expenditures. Civil society work on tax in developing countries has been less focused on the “nuts and bolts” of country tax systems and more on global norms and standards around such issues as aggressive tax avoidance and illicit financial flows, or on particular aspects of domestic tax policy, such as natural resources or tax incentives. IBP’s experience in improving the structure of budgets, the availability of information to inform budget debates, and the opportunities for the public to participate in those debates is widely viewed as a natural complement to work on the overall framework of tax systems at the country level.

With regard to the context for such work, winds of change are in the air. Taxes and their role in perpetuating and mitigating inequality have risen to the forefront of global policy debates and have catapulted onto the front pages of newspapers across the globe. The Paris Climate Agreement and Sustainable Development Goals both emphasize domestic resource mobilization in generating the revenues needed to meet aggressive policy targets. Global exposés, such as the Panama Papers — along with the hard work of international campaigners like the Tax Justice Network, Oxfam, and Christian Aid — have shed light on the role of tax havens, aggressive tax avoidance, and illicit flows in diverting wealth (often generated by the exploitation of natural resources) from the economies of developing countries. However, despite the recent attention, a gap remains between the level of engagement in global policy debates and the level of meaningful civil society participation in revenue debates in most countries in the world.

Contributing to this gap, the mystique around tax often discourages civil society participation and, to the extent tax debates are conducted in public, they are dominated by elite interests with sophisticated expertise. Also, civil society already has had to fight for a seat at the table where budgets that affect health, sanitation, and other basic needs are discussed. Tax debates have traditionally been less open and are also more politicized and divisive than those over transparency or pro-poor spending policies, particularly when conflicts arise between the public interest and influential opposition. Thus engaging in work on tax will likely test partners’ ability to think politically and may require cultivating new allies and developing new strategies in order to succeed.

It may seem counterintuitive to take on new and challenging work at a time when the space for civil society engagement is eroding in many parts of the world. In fact, research shows that many of the most important gains around budget work have come during times of crisis. Recent evidence suggests that increasing the transparency and accountability of tax systems can spark a broader national dialogue around governance that leads to reform, and that civil society engagement can play a critical role in making the link between domestic resource mobilization and greater accountability.

Historically, debates around tax reform and taxation have focused on ensuring that there are funds to support the basic functions of government and create the context for economic growth. While the need for “more revenue, better spent” remains fundamental to human and economic development across most of the developing world, the structure of domestic tax systems has important implications for governance and the relationship between governments and their citizenry.

The connection between the two sides of the budget is also essential to a healthy democracy. Research suggests that taxation can produce a “governance dividend” when governments provide greater transparency and accountability in return for higher levels of taxation and tax compliance. Taxation can also instill a greater sense of ownership among citizens who feel empowered to make demands of their governments. However, this “virtuous cycle” is not inevitable. Tax policies that are equitable and well administered, and revenues that are spent to advance the public good, build strong bonds between governments and citizens. Those that are riddled with preferences and rely on arbitrary or coercive collection mechanisms undermine confidence in governance.

Civil society tax work can play a critical role in ensuring that the structure of tax systems promotes accountability and leads to a greater understanding of the role of government and the importance of effective governance. A civil society tax agenda builds off the core capacities that IBP and its partners have honed during the past two decades. Budget groups can increase public awareness by translating complex tax concepts and illuminating the connections between revenues and the services they provide. Collective advocacy efforts can take advantage of greater public awareness to help level the playing field and strengthen the public’s voice in policy debates that were previously the exclusive purview of elite interests. And a mobilized civil society can play an essential role in rooting out corruption and ensuring effective service delivery, creating a feedback loop that can boost support for higher levels of taxation and improved compliance with existing tax laws.