This post is from “That’s How the Light Gets In”: Making Change in Closing Political Environments – a collection of essays that examine evidence of how to pursue fiscal accountability in a tougher political environment. The collection is a companion to IBP’s 2016 Annual Report. Read more essays from the collection on the Open Budgets Blog here.

The following is a tale of how when fighting for equity and social justice — or good governance and accountability — politics matters. When the political environment shifts, one step forward can quickly turn into two steps back without vigilance and an eye open for opportunities.

Under the two terms of India’s United Progressive Alliance (UPA), led by the Congress Party, development rights — to work, education, and the universal right to food, among others — were converted into specific legal entitlements. In addition, the framework of legal protection for farmers, women, and other marginalized communities was strengthened. Most significantly, laws like the Right to Information Act empowered people and their organizations to lead the fight for greater transparency and accountability in the use of public money through the budget.

In 2015 the political tides turned. Prime Minister Narendra Modi of the Bharatiya Janata Party (BJP) swept into power on promises of ache din (good times), jobs for India’s youths, and an end to corruption. He even promised to put RS 1,500,000 (USD 25,000) into every Indian’s bank account using the “black money” from corruption that would be traced and recovered as soon as his party was elected. While these wild promises were casually brushed aside by BJP President Amit Shah as a mere jumla (a rhetorical, fake assurance), the promise of a shift toward economic policies that would support a free market was to be taken seriously. Would the UPA’s progressive programs, policies, and legal frameworks survive the ideological shift? There was good reason to ask this question. Soon after coming to power the new government began to threaten to revamp the entire framework, saying the new free market approach would encourage and enable the poor to realize their full potential and become a part of the “aspirational” and “empowered” middle class.

One of Modi’s primary targets was the Mahatma Gandhi National Rural Employment Guarantee Act (MGNREGA) — the world’s largest and most ambitious employment program that had provided wage employment to 100 million people, keeping them from hunger in difficult times. The response by Indians, led by social movements, provides a good example of how the political space created by some of these laws has helped protect the laws themselves — and the ideas that they represent.

MGNREGA was established in 2005 through a unanimous vote, including support from the BJP. Given this widespread political backing, the Modi government would struggle to repeal the Act, so instead it worked to undermine MGNREGA’s basic tenets.

It did this by trying to shift MGNREGA’s focus from providing employment to building infrastructure; restrict funding; and limit its scope to only the poorest blocks of the country. The BJP supported this assault on the scheme’s basic tenets with statements by rightwing economists urging the government to stop such “wasteful expenditure” (approximately USD 9 billion a year).

Clearly this was not the time to try to pass new laws or establish new programs. Civil society needed to defend what existed. The Indian Constitution became a rallying point for social movements and citizens groups, as they sought to remind the government of its duty to implement the current laws. The government’s attacks on the social contract drove home the need for public participation, including monitoring spending, implementation, and outcomes of laws and programs. 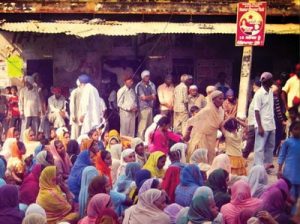 People fought back — largely using the provisions of the MGNREGA. By law, the benefits provided through the act are not limited by allocations made through the budget process, which helped prevent the government from completely starving it of funds. It is a “guarantee” that legally entitles up to 100 days of wage employment to any rural household seeking work. The law also establishes transparency and accountability mechanisms, such as social audits and an open and transaction-based information system, which enable people to identify and document implementation failures. Given the widespread public support for MGNREGA, particularly among rural citizens, civil society and social movements knew that the most powerful response would be in the streets, rather than through allies within the halls of power. In one of the biggest civil society mobilizations the country has seen, just six months after the BJP came to power, thousands of poor people brought their protests to Delhi, announcing their resolve to protect their hard fought legal entitlements. The government’s attacks on social programs brought many CSOs and social movements together to fight to preserve the progressive policies that they had helped establish. “Save MGNREGA!!” “Government money is our money — we won’t accept budget cuts!” These were the rallying calls.

The government responded with the stick. Civic space was severely curtailed. The BJP undermined the very transparency and accountability laws that it had previously supported by steadfastly failing to follow existing laws, such as the Whistleblower Protection Act and the Independent Anti-Corruption Commission, the Lok Pal.

As the government continued to drag its feet on MGNREGA, civil society began petitioning the Supreme Court of India to enforce the implementation of the program “as per law.” This action helped strengthen and reassert democratic practice, not just for MGNREGA but for justice and freedom. Before the Court, the government repeatedly reiterated its commitment to implement the letter and spirit of the law, but MGNREGA’s transparency measures enabled activists to use the government’s own data to discredit its claims.

Throughout the street protests and court actions, incisive budget analysis by the Centre for Budget and Governance Accountability (CBGA), a longstanding IBP partner, played a critical supporting role. CBGA’s analysis helped to shape and strengthen the demands around MGNREGA in the context of overall fiscal space and other social sector programs in India, ensuring that these actions were backed by well-crafted arguments and the strongest evidence. The media also prominently covered a series of critical comments made in court. Facing pressure on all fronts, the government increased funds over the budget allocation for MGNREGA — an additional Rs. 9,000 crores (USD 1.5 billion) in one year. Thus the government was forced to acknowledge in real (i.e., budgetary) terms the value of the MGNREGA.

Two years later, in the face of a devastating drought and amidst the tumult of an arbitrary and authoritarian decision to demonetize 85 percent of India’s currency notes, we find the Modi Government now having to turn to MGNREGA to alleviate widespread distress and dissatisfaction. The turn of events led the Minister of Finance and the Prime Minister to speak enthusiastically of their commitment to MGNREGA during the budget debates and even to try to take credit for changing it for the better.

MGNREGA has not been the only battleground. The ongoing struggle for justice, equality, and democratic freedom in India continues under increasingly challenging circumstances. But, the 10 years of institutionalizing the gains made, and working on its detailed implementation, has given people the confidence to assert their beliefs and occasionally turn a challenge into an opportunity. As the world faces a series of authoritarian rulers with little respect for democracy or social justice, there are lessons to be learned from the resistance of social movements. We must look for, and make, opportunities for creative engagement. There is neither the time nor the space for despair.