Forty years since launching its program of “reform and opening,” China is still going strong as a one-party state. Under the Communist Party’s tutelage, China’s development has diverged from historical patterns whereby growing economic prosperity has led invariably to the rise of democratic institutions, as richer and better educated citizens demand more say in society and government. Rather than becoming more democratic, China has instead become more authoritarian and intolerant.

The question we address in this post is whether China’s current path is a temporary detour, or if it represents the emergence of a new development “model” that the Chinese government is touting. We argue that the results-based, pragmatic approach to politics associated with “Chinese-style democracy” may look attractive to countries seeking to kickstart development, but the authoritarian aspect of the model, along with its economic foundations, may be unsustainable even in China where hard tax and spending choices will soon have to be made.

What is “Chinese-style democracy”?

At the 19th Party Congress held in October 2017, President Xi Jinping asserted that “China’s socialist democracy is the most extensive, authentic, and useful democracy.” This assertion draws from Chinese theorists who argue that democracy should be understood broadly to apply to economics, politics, culture, and society, not just the political acts of voting and elections. Harking back to the materialist basis of Marxist ideology, they argue that “Chinese-style democracy,” or “China’s socialist democracy” in Xi’s discourse, has delivered results in providing not only economic growth, but also high-quality public goods and improvements to living standards for the public. While China’s ‘growth miracle’ — its extraordinary rise in global trading status and achievements in poverty reduction — are well-known outside the country, the government’s record in providing public services has received less attention.

Since the turn of the century the Chinese government has vastly increased funding for public services, with budgetary expenditures on education and health both increasing at annual rates of 24% over the period 2000-2012. The achievements are extraordinary. Average education attainment for the population aged 15 and above has risen from 5.3 years in 1982 to 9.6 years in 2017. The number of higher educational institutions grew from 598 to 2,880 during 1978-2017, and the gross enrolment ratio in higher education grew from 0.4% to 45.7%. The national college entrance exam (gaokao) is widely accepted as fair in providing opportunities for upward mobility, even for rural and minority children. More than 95% of the population is enrolled in health insurance, and virtually everyone is covered by a social pension, albeit with vastly different benefit levels.

At the same time, the government has built massive amounts of public infrastructure – from highways, expressways, airports, ports, and high-speed rail, to urban subway systems, buses, schools, hospitals and clinics, and other urban facilities. These infrastructure projects have thoroughly transformed the living environment for most citizens – especially the half living in cities. It is these achievements, along with rapid income growth, that give the government bragging rights as the “most authentic and useful democracy.”

Is the model sustainable?

The question remains of the extent to which citizens accept this pragmatic “Chinese-style democracy.” For now, the answer appears to be a resounding “yes.” A 2014 Pew Survey found that, aside from some concerns about corruption and pollution, 89 percent of Chinese respondents were happy with how things are going and optimistic for their future – the happiest among the 43 countries surveyed. Of course, with double-digit growth and overflowing government coffers through the first decade for this century, the government could spend lavishly on public goods and services to forestall any doubts about the country’s stewardship.

Even so, there is evidence that pressure is building, as prosperity and better education are indeed leading citizens to make sporadic demands for self-governance. These have ranged from outbreaks of environmental nimbyism to experiments in participatory budgeting (PB) introduced in rich coastal cities to assuage residents’ desire for change. These are carefully managed, and mostly confined to grassroots governments at the neighborhood and township levels. The largest program is in Shunde District in Guangdong — a city with a population of more than 7 million and a per capita GDP of more than $20,000 — where the government has invited public participation in budgeting for selected projects that serve the local community. The program allows the public to access project details and budget proposals and provide comment. Since its inception in 2012, coverage has grown to projects totaling 2 billion yuan in 2017 with 220,000 online followers and 40 experts participating in consultation meetings.

The central government has also taken steps to raise budget transparency and explain its work. Since 2015, all levels of government are required to publish their budgets online, and citizens are empowered to file requests for missing information specified by the budget law. It is now commonplace for fiscal legislation to solicit public comment, such as the heated online discussion that took place last September prior to rollout of the higher threshold for the personal income tax. It’s anyone’s guess how far these openings will go, especially since they run in tandem with suppression of the media and political activism.

Where will China be in a decade or more? 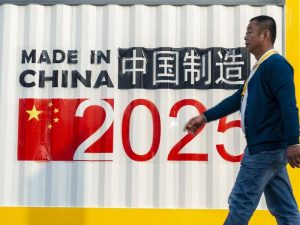 With its traditional growth engines of manufacturing and investment in infrastructure running out of steam, the Chinese economy has been slowing since 2010, and government revenues have slowed faster. Even before U.S. President Donald Trump launched his trade war to threaten export markets, investments were suppressed as the government focused on reducing financial risks left from the previous decade’s massive investments in infrastructure. Over the next decade, it’s hard to see the government having the same financial resources to “buy” popular acquiescence as before.

Finally, under Xi Jinping, China has embarked on a campaign to pump up national pride that includes an assertive foreign policy buttressed by ever-bigger and grander plans such as the Belt and Road Initiative and Made in China 2025, all intended to project China’s power and standing on the global stage. Should these grand but risky plans fail they will further drag down China’s growth and the government’s popular support. In sum, the foundations for the China “model” may have an expiration date.