How Participatory Reforms Can Enable Voice But Fall Short of Transformation

Reforming the budget process to be more open and participatory to civil society and citizens has become a popular approach around the world. This trend represents great potential for democratic transformation, especially in countries where the allocation of public resources has long been left in the hands of a few. However, attempts to undertake such reforms in the Philippines have had mixed results. The Philippine experience with Bottom-Up Budgeting (BuB) offers valuable insights into the pitfalls that must be avoided for participatory reforms to be transformative.

Bottom-Up Budgeting was implemented nationwide by the government of Benigno Aquino from 2012 to 2016. While the program provided space for members of civil society to identify priority projects for government spending, design flaws limited its ability to transform governance. My paper, “Pitfalls of Aiming to Empower the Bottom from the Top: the Case of Philippine Participatory Budgeting” reviews the design and implementation of BuB.

In the paper, I emphasize the importance of design when undertaking participatory governance reforms. Not all reforms that intend to provide space for participation achieve the transformative results that are often promised. BuB is an example of this. It indeed created space for civil society organizations (CSOs) to partner with government to identify budget priorities. However, it failed to achieve power shifts that would strengthen the ability of civil society to hold local governments accountable.

The BuB initiative did achieve some positive changes that facilitated citizen empowerment:

In fact, many of the projects that were chosen through BuB were perceived as responding to grassroots needs. BuB mobilized the participation of a considerable number of civil society groups at national and local levels.

However, top-down design had a ‘centralizing’ effect that limited impact

By “centralizing,” I refer to how the program, which was designed to facilitate bottom-up participation, ended up redirecting authority to the top.

There are several aspects of the BuB design that had a centralizing effect:

Building on and developing the capacity of existing local government structures has been crucial to the success of other participatory budgeting initiatives. However, the Philippine BuB bypassed existing participatory planning processes, including those of local development councils. Instead, it introduced one-size-fits-all, centrally imposed processes.

The tedious process set up to approve projects and release central government funds to communities created numerous “veto players,” as shown in the figure below, resulting in a perennial backlog. The program’s large backlog of projects was used by the succeeding administration to justify its cancellation. 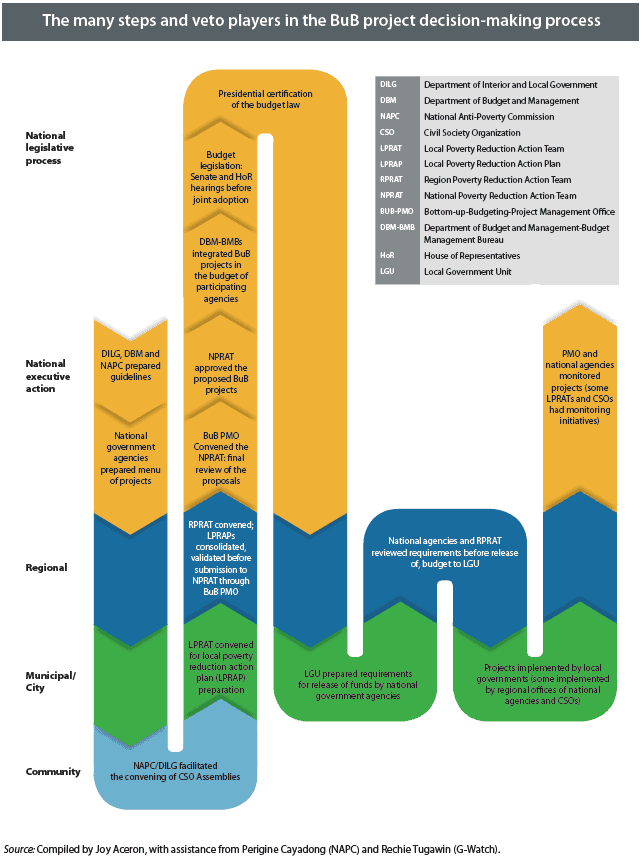 The BuB program’s potential to activate citizen engagement depended significantly on the capacity of the coordinating national government agency to provide direct support. What arguably weakened the capacity of the program to deliver transformative impact was the transfer of coordination and management from the NAPC, which is skilled in organizing CSOs, to the DILG, which was new to implementation of participatory reforms. This was aggravated by the cancellation of funding for CSO empowerment, the limited manpower allocated to the program, and an underdeveloped monitoring system that did not enable true civil society oversight. This exposes the irony of weak civil society support in the design of a supposed citizen empowerment program.

My paper argues that because of the top-heavy design, BuB fell short in achieving its main political reform agenda of empowering grassroots organizations through downward accountability, thus preventing lasting, pro-citizen power shifts. Ultimately, BuB did not empower local civil society members to become a countervailing force vis-à-vis local politicians in the arena of fiscal governance and related decision making, which arguably was its most essential intended reform.

Thus, in the Philippines, BuB became an example of a reform that created a procedural mechanism for civil society participation but was unable to improve government responsiveness. It provided civil society with a “voice,” but without “teeth.”[1]

Another way to analyze BuB is to determine whether it is an example of Bibingka (sandwich) strategy. The Bibingka strategy assumes that reforms are best achieved and sustained when there is a “symbiotic interaction between autonomous societal groups from below and state reformists from above.” Using this strategy to analyze BuB in the Philippines, it can be said that the program attempted to cook a lot of rice cakes with “fire from the top” (apoy sa taas): Cabinet officials initiated the program and central-government actors designed and coordinated it. At the same time, the program had weak “fire from below” (apoy sa baba). In other words, there was little independent demand and the voice of civil society was only weakly expressed due to a lack of support and encouragement.[2]

Finally, in my paper I echo related studies that found that participatory budgeting is successful mainly when it is complemented by other democratic, capacity-building reforms, and when it is part of a broader change agenda with a clear, coherent, progressive direction.[3] The Philippine case highlights the importance of designing participatory programs in a way that enables downward accountability through civil society oversight and independent citizen action and voice. This is how participatory budgeting can become truly transformative.

* The study to which this blog refers is part of the ongoing collaboration between G-Watch and ARC which aims to make action and research on transparency, participation and accountability more strategic and transformative. Check www.accountabilityresearch.org and www.g-watch.org.

[1] Jonathan Fox refers to voice as citizen inputs, feedback, and action, and teeth as the capacity of the state to respond to voice.

[2] For more information about Bibingka strategy, see “The Bibingka Strategy in Land Reform Implementation: Autonomous Peasant Movements and State Reformists in the Philippines,” by Saturnino Borras Jr. For an explanation of sandwich strategy, as coined by Jonathan Fox, see “The Politics of Food in Mexico: State Power and Social Mobilization.”