Save Lamu! Drawing lessons on public participation from other sectors

At the end of June, Kenya’s Environmental Tribunal (part of its national judiciary) overturned the grant of an environmental license to a power company for the construction of a coal plant in Lamu County.  The decision to grant the license elicited a lawsuit (filed in 2016) by an association of residents called Save Lamu. After nearly three years, the courts found in the residents’ favor on the grounds that the company and the National Environmental Management Authority (NEMA) had failed to properly engage the public in the Environment and Social Impact Assessment (ESIA) process.

It is tempting to conclude we cannot learn much from such a case because the constitution in other countries is not as progressive as it is in Kenya or South Africa. However, to a substantial extent, the Lamu decision relies less on the Kenyan constitution than on the requirements for participation written into the more pedestrian Environmental Management and Coordination Act. This statute predates the constitution by a decade and the relevant regulations on environmental impact assessments at the heart of this case date back to 2003.

Lessons offered by other sectors

Why is this significant? Too often we look for ideas about public participation within our own silos, rather than trying to learn from similar processes that have been around for some time, but in other fields. As interest has grown in public participation in budgeting over the last decade, how much time have we spent exploring participation processes in other sectors, such as the environment?

Formal public participation mechanisms in other sectors have been in place for years, if not decades, in many countries. For example, in the United States, both the National Environmental Policy Act and the Clean Air Act have been around since the 1960s and have been interpreted by the courts to require public participation. The Environmental Protection Agency (EPA), charged with implementing these laws, experimented with different approaches to engaging the public, including the use of advisory committees (open to the public and with advance notice) in the 1970s. A 1977 report by the independent National Research Council found that “the participation of citizen groups can add, and has added, to the quality of Agency decision making by raising new issues, by inserting new or different assessments and analyses of relevant issues into the decision-making process, and on occasion, by presenting new information (such as the discovery of certain contaminants in drinking water).”

The Toxic Substances Control Act passed by Congress in 1976 even envisioned that the EPA could financially sponsor the involvement of citizen groups when they lack enough resources and their participation would “substantially contribute to a fair determination of the issues.” This idea was controversial at the time, and I am not sure what became of it, but that is to some extent my point: There is clearly something more that we can learn from history as we move forward to define “new” approaches in sectors like public finance.

The options for our consideration are not confined to 1970s environmental policy in the United States. In Germany, for example, the Federal Building Code, which dates back to 1960, was amended in the 1970s to facilitate greater public involvement in urban planning. Currently, the code requires the public to be informed about plans for building and development, including the set of alternatives under consideration, and to be given opportunities for “comment and discussion.” Draft land-use plans must be displayed publicly for one month along with the reasons for the approach proposed. The public is to be given one week’s advance notice of the publication. During the month of display, the public may submit comments and the government must respond to each comment received. If changes are made to the draft plan, it must be displayed for another month with the relevant revisions. 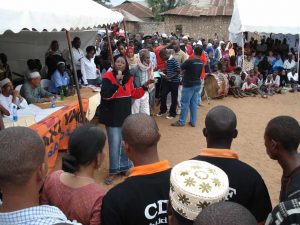 Returning to Kenya, the regulations for public participation in the environmental impact-assessment process, which were at issue in the Lamu coal case, require a developer to seek views from residents who will be affected by the project. The developer must display posters near the site, publish advertisements in national newspapers, and run radio spots for two weeks in official and local languages. Three public meetings must be held and announced one week in advance. A qualified “coordinator” must be appointed to collect comments and forward them to NEMA, with translation as necessary.

An interesting aspect of the Lamu coal case is that the project developer was found to have implemented public participation but at the wrong time. The participation meetings were held too early in the process and were therefore too general to allow proper discussion of impact and mitigation, as envisioned by the regulations. Thus, the regulations provide sufficiently detailed guidance to hold companies and government agencies to account for flawed participation processes.

Implications for the budget world

Nothing in the American, German or Kenyan regulations on public participation in environmental decision-making is particularly radical. Rather, the point is that if we look at basic ideas, such as how much notice the public should receive before a consultation, or how much time they should receive for comment, the standards that we can find here are informative about what is necessary for properly constituted budget and environmental participation—and, in fact, most forms of public participation in government decision-making. Further, these standards suggest that proposals should include alternatives (Germany), a combination of written comments and physical meetings (Kenya), and meetings that are inclusive of the relevant stakeholders in terms of language and ability to attend (Kenya, United States).

However, when I reflect on the forums in which I have participated over the years that have discussed standards for participation in budgeting, including many in Kenya, I do not recall any of us referring to existing standards from other sectors. Instead, we debated such things as the meaning of “adequate notice” as if we had to start from scratch. In fact, it is clear to me now that relevant standards already exist in Kenya and, to some extent, globally. Not only do these exist, but they are rather old, and there is likely experience with how well they work that would serve us well as we define standards in other areas.

Going forward, we should do more to learn from practices and standards in other sectors and jurisdictions. Later this year, as a starting point, I will release findings from a global review of legal norms related to justifications by government agencies (including the environmental agencies discussed here, but also all other types of government agency) and what we can learn from them. This is a small contribution, but I hope it will spur others to look further afield for guidance on norms and standards related to transparency and participation in government decision-making.