More than 5 million South Africans live in informal settlements—sprawling, crowded communities that frequently lack even the most basic of public services, such as safe, clean toilets and water. An estimated 43% of the total population does not have access to clean water, for example. In informal settlements communal toilets are often neglected and not regularly cleaned. It is the mission of IBP South Africa to improve service delivery to poor communities via oversight of government budgeting and spending, and long has focused much of its work on mobilizing settlement residents.

In mid-March, that all came to a sudden halt when we heard that someone in our small office block,where we share bathrooms and kitchen facilities, tested positive for COVID-19. We closed our office and organized to work remotely: a flurry of finding dongles and nervous trips to and from the now-infected office ensued.

The next day, President Ramaphosa prohibited public meetings of over 100 people, suspended international travel, closed the borders to most foreign visitors and urged the now-routine steps of washing hands and social distancing. Lockdown soon followed as infections multiplied. 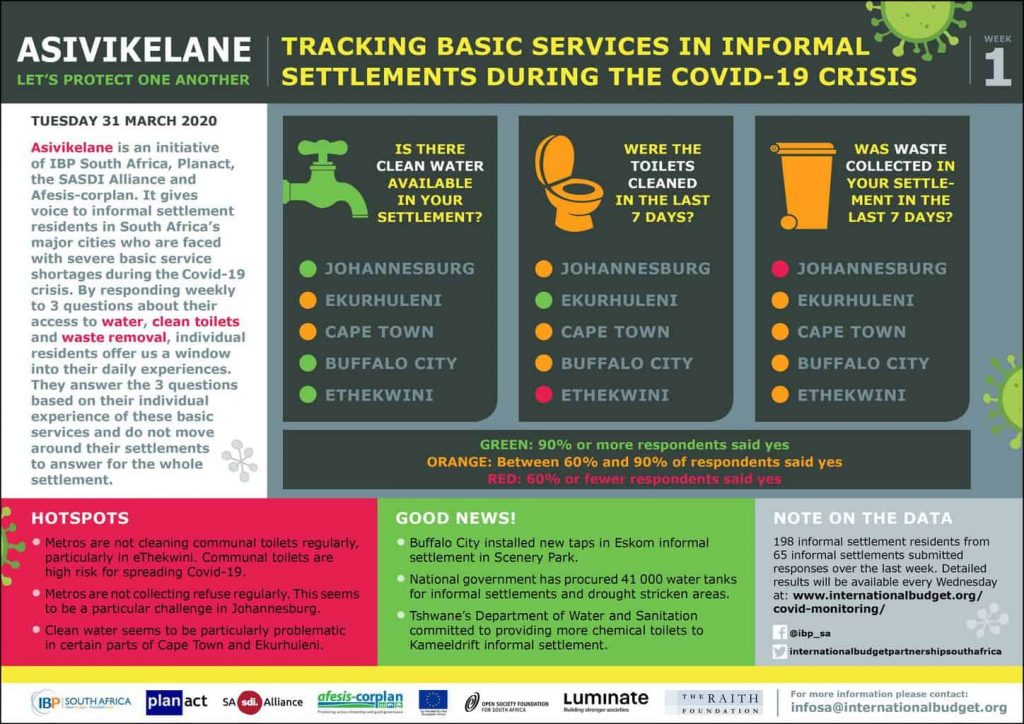 The president’s announcement was welcome. But the IBP South Africa team and our informal settlement partners felt that the conditions in which these residents live—very close quarters, with shared water and toilets—was not being sufficiently addressed. We started working with a team of health professionals to identify hygiene practices that would help informal-settlement residents avoid contracting the novel coronavirus while using communal facilities. We produced and posted/distributed a poster and pamphlet in both English and eight local languages.

The response was overwhelming, with national, provincial and city government agencies endorsing and reprinting it—often requesting to add their logos. We initially translated the pamphlet into four languages, but on demand, we translated it into six more, including Portuguese and Chichewa (spoken in Malawi).

The next few days were a blur, but while working on the pamphlet, IBP South Africa and its partners—SASDI Alliance, Planact and Afesis-corplan—began working on an initiative called Asivikelane, “Let us protect each other” in Zulu. Its goal: to mobilize settlement residents to monitor failures in delivery of critical hygiene services and report the problems.

To date, partner organizations have enlisted the help of 331 residents from 80 informal settlements in six municipalities. If the internet and cellphone networks hold up (this is all done remotely), we estimate that in the weeks to come we will be able to ramp up the initiative include to at least 100 settlements.

IBP South Africa consolidates the answers and disseminates a weekly press release. IBP and partners will use this data to bring problem areas to the attention of the relevant city agency. When cities are unable to respond, we will engage with the national body charged with coordinating the COVID-19 response.

The first week of monitoring found that metros were not cleaning communal toilets or collecting trash regularly, and clean water was in short supply, particularly in certain areas. However, good news included new water taps and tanks in some settlements and a promise of more chemical toilets in one community. The responses from government were again very positive with the national minister of human settlements requesting a briefing and one of the city governments fixing all of the problems that were identified and asking that we bring them these problems on a weekly basis.

Meanwhile, IBP South Africa is researching how reporting lines and budget processes/procedures have changed during the state of disaster declared by the president. The goal of this research is to inform the work of IBP South Africa and our partners as we engage with various levels of government. We are still in the early stages, but in many cases, we are finding, for example, that elected local councils have ceded all power to the mayor thus changing the advocacy landscape significantly. One of our partner organizations, the Dullah Omar Institute at the University of the Western Cape, is building its expertise on the legal changes in governance and budget regulations of this situation. We will also open a conversation with the national treasury and auditor general.

The future is very uncertain and there is so much about our working environment that is utterly unpredictable. For how long will this go on? Will government restrictions become stricter as the crisis worsens? How many of the informal settlement residents in our network will get sick? Despite these unknowns, we think our work will emerge stronger from the crisis.

As a result, the relationship between IBP South Africa, its partners and various layers of the government will strengthen, because we are all working on the same initiative at the same time and interacting more intensively and regularly than before. In fact, after the launch of Asivikelane, three city governments reached out to find ways of collaborating. Stay tuned!