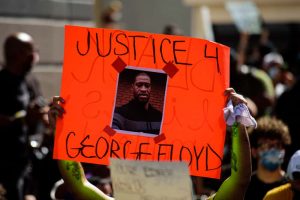 The video of the brutal and senseless killing of George Floyd, an African American, by a white police officer in the United States  has captured the attention of the public around the world. Floyd was the most recent in a series of killings of unarmed black people by security personnel. Thus, what we see is a cumulative, collective wave of frustration and rage, pushing people into the streets to demand racial justice.

A key demand of the protestors is to “defund” police budgets. They argue that police forces are increasingly militarized and using disproportionate force to engage with people, especially people of color, with inevitably bloody outcomes. The protestors also argue that the police have increasingly taken on functions in communities for which they are unprepared and that are best handled by mental health professionals and social workers.

While most media reports focus on police budgets in the U.S., we decided to look at government spending on policing from a global perspective. Data on budgets are not easy to access in many countries—as our latest Open Budget Survey painfully concludes—and even when budget documents are published, they often lack sufficient details to enable meaningful analysis of a government’s priorities. But we were able to use data from the World Bank’s BOOST database to compare budgets and actual expenditures incurred for policing functions in 19 countries* over a multi-year period. (On average, for each country, we were able to obtain budget and expenditure data for the most recent four to nine years).

The most striking finding from the data is that in the 19 countries we analyzed, overall budgets were underspent by 10% on average (in other words, spending was less than what was allocated in the approved national budget). To put this in perspective: The degree of underspending is equivalent to what would be needed for an entire health or education budget in many of these countries. In contrast, the actual expenditures on police functions were slightly overspent by approximately 2%.

As the chart below shows, in every region of the world for which data were available, police budgets are either significantly overspent or are underspent by much less than the overall national budgets. 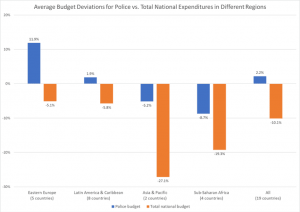 In individual countries, the problem is even more striking. For example:

These examples suggest that police budgets in many countries tend to be protected from in-year reductions—even as other government functions and investments suffer from under-execution. 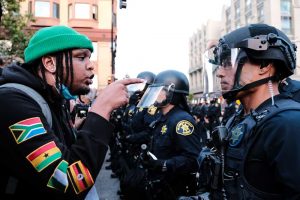 There are also other critical issues surrounding the equitable use of police budgets that must be analyzed and discussed with a country’s people. For example, our South African partner, the Social Justice Coalition, analyzed the assignment of police personnel to different jurisdictions and found that more police were assigned to neighborhoods with lower rates of violent crime (largely white and rich communities) than to neighborhoods with higher rates (largely black and poor).

Although police perform the vital functions of maintaining law and order and protecting society from violence, in some cases, police abuse their authority and engage in corrupt practices, use excessive force, target people unjustly (as with racial profiling), and fail to protect the most marginalized segments of society. The police are often seen as partisan government enforcers who silence dissenting voices, including those of journalists, human rights activists and peaceful protestors. Last year, the U.S. Treasury imposed sanctions on the former head of the Ugandan police force for human rights abuses and his involvement in corruption. More recently, the Ugandan police have been accused of using excessive force, including beating fruit sellers and arresting lesbian, gay, bisexual and transgender (LGBT) youths under the guise of enforcing COVID-19 related shutdowns.

There can be no justice without open budgets.