What if governments budgeted as if all people and the planet mattered — really mattered? What might a public finance management system look like if it were focused more explicitly on the well-being of current and future generations, rather than just on economic growth and fiscal deficits?

These questions have never been more salient. Around the world, we have seen dramatic and increasing levels of inequality, persistent pockets of poverty, and worsening signs of environmental breakdown — all this feeding growing discontent, loss of faith in democratic institutions, and political upheaval. As if that weren’t enough, the COVID-19 pandemic has put countries in front of the starkest possible choices in terms of how far governments should go to save both lives and livelihoods.

Public finances are central to all of these issues. Governments’ decisions about whom or what to tax, and who will benefit from public spending impact people’s incomes and well-being, determining whether a society will be more equal or remain divided, and whether people — including the disadvantaged — will have access to health services, secure jobs and real opportunities for a better life. New Zealand, a longstanding leader of public finance management reforms, is once again charting a path for others to follow with the introduction of its “Well-Being Budget” approach in 2019.

In a new paper, we look at how this initiative came about, how successful it was, and what other countries can learn from New Zealand’s experience.

Measuring what matters: the move from GDP to “LSF”

Until recently, New Zealand was better known for the public finance reforms it introduced in the 1980s and 1990s which were much more narrowly focused on safeguarding fiscal discipline and promoting fiscal transparency, government efficiency and economic growth. An underlying assumption was that a sound fiscal position and strong economic growth would provide benefits to all. Unfortunately, despite initial success, New Zealand’s income and productivity growth has been low and lagging, and inequality high and rising for some time.

The government’s response emerged over a decade of experimenting with a more varied set of indicators that covered various aspects of well-being. The result was the Treasury’s Living Standards Framework (LSF), which establishes 12 domains that contribute to current well-being, and four capitals, or assets, for ensuring future well-being (Figure 1), accompanied by a set of 61 progress indicators, broadly aligned with the OECD’s Better Life Index. When Prime Minister Jacinda Ardern’s government came to power in late 2017, it decided to put the LSF at the core of the budget process. 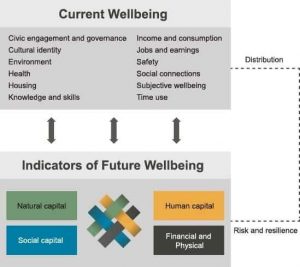 From plan to action: the 2019 Well-Being Budget

New Zealand’s first Well-Being Budget was announced in December 2018 and tabled in May of the following year. It incorporated both policy and budget process changes intended to embed an explicit focus on improving well-being, setting in motion a series of broad reforms to radically change the way in which the government would approach budgeting.

The government set five policy priorities: (a) transitioning to a low-emission economy; (b) supporting technological innovations that open social and economic opportunities; (c) increasing income, skills, and opportunities for Māori and other marginalized groups; (d) reducing child poverty and family violence; and (e) supporting mental health, especially for the young.

During the budget formulation process, line ministries were asked to show how proposed expenditures either aligned to the five priorities or contributed to well-being, and to identify 1 percent of their baseline spending that could be redirected to areas better aligned with well-being. The final budget proposal included new spending in the five priority areas amounting to roughly 5 percent of total expenditure, presented in separate summary tables, with extensive reference to the LSF.

Finally, the government announced a series of process changes – including introducing and revising relevant legislation – to make it easier for the public service to mobilize quickly around government priorities, and to embed well-being in agency reporting across government.

Takeaways from 2019 and ways forward for New Zealand

While the 2019 Well-Being Budget might have fallen short of some expectations, it made initial policy moves in the right direction. Perhaps more importantly, it introduced innovations into the budget process that have the potential to ultimately improve policy substantially, particularly for some of the most disadvantaged New Zealanders.

The government did many things right, including: tapping existing capacity, which helped implement the budget process changes quickly; making its policy priorities explicit, thus highlighting tradeoffs; emphasizing and fostering collaboration between ministries; and strengthening accountability by requiring agencies to demonstrate how their budget proposals were linked to well-being—and using this information to decide what to include in the budget.

There are areas for improvement, though, including better integrating considerations of fiscal limits and tax policy into the well-being approach. Applying the well-being lens to these two areas could increase the space for transformative budget policies, align tax incentives with well-being goals, and reduce inequality through redistributive revenue policies, among others. Another important gap in 2019 was the limited engagement of the public in the well-being budget process, particularly on setting the five policy priorities. The government will need to make its well-being approach more accessible, as well as create more opportunities for citizens and civil society to participate in its evolution, to help build a political culture more conducive to transformational change and to strengthen public confidence and accountability.

Lessons for other countries

In our paper, we highlight several important aspects of New Zealand’s experience that are relevant for other countries looking to reorient their budget processes toward improving intergenerational well-being.

*Delaine McCullough is Head of Climate Finance Accountability and Paolo de Renzio is a Senior Fellow at the International Budget Partnership (IBP). Chye-Ching Huang is a Senior Director of Economic Policy at the Center on Budget and Policy Priorities (CBPP); her research on this project was conducted solely for IBP and does not necessarily reflect the views of CBPP.