Role of the legislature in formulating and monitoring the budget during the COVID-19 pandemic: examples from Latin America

by IBP and Directorio Legislativo

This work was carried out with the collaboration of civil society organizations in seven countries: Civil Association for Equality and Justice (Argentina), Institute of Socio-Economic Studies (Brazil), Observatory of Fiscal Expenditure of Chile, Fundac National Forum for Colombia, National Foundation for Development (El Salvador), FUNDAR – Center for Analysis and Research (Mexico) and Ciudadano al Día (Peru).

This post was originally posted in Spanish and is available here.

Since the start of the pandemic, governments in Latin America and the world have allocated enormous amounts of resources to confront the health, economic and social impacts. While rapid responses to address the crisis are imperative, the transparency, oversight and accountability of these processes cannot be neglected.

What role are legislatures playing in allocating or reallocating resources, creating special funds or monitoring the actions of governments during the pandemic, and is it different from their role before the crisis?

An analysis of practices in seven Latin American countries — Argentina, Brazil, Chile, Colombia, El Salvador, Mexico and Peru — between the months of April and May, allows us to identify certain trends in the context of the pandemic. 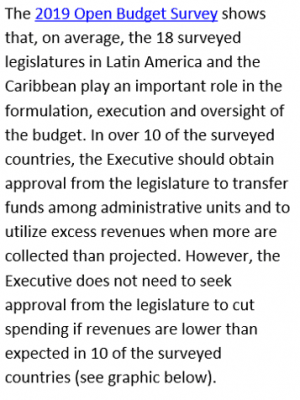 The current situation has led to a strong concentration of decision-making in the Executive. Although legislatures are gradually resuming their activities, the COVID-19 pandemic generated disruptions in the functioning of legislative bodies, which were forced to adapt to new modes of working. Many of them have made substantial progress in this area, but the procedures to debate and vote on laws and monitor their implementation have been interrupted in some of the countries surveyed. Moreover, legislative activity, particularly during the early months of the pandemic, was more focused on holding informative briefings.

The legislature’s responsibility to conduct political oversight is of fundamental importance to ensure transparency and accountability in government action. However, in spite of creating new mechanisms to monitor the use of supplemental public resources, this role is currently lacking and reflects institutional problems that have existed since before the pandemic (see box).

Expansion of the Executive’s powers to manage funds

Our analysis indicates that in Brazil, Chile and El Salvador, the legislature has had a more active role than in Argentina, Colombia, Mexico and Peru, where most of the budgetary decisions to respond to the pandemic have been carried out through executive or presidential decrees. In Colombia, the declaration of the State of Economic, Social and Ecological Emergency empowers the President to issue decrees with the force of law, including the creation of new taxes or modifications to existing ones. In Peru, Congress delegated to the Executive the power to legislate in tax and tributary matters, investment promotion and protection of the productive, extractive and service sectors for 45 days.

Further, there are variations in the level of legislative oversight in these four countries. In Argentina and Peru, the Legislative Branch must approve the decrees immediately after their publication. On the other hand, in Colombia, they are immediately subject to review by the Constitutional Court, and Congress may reform or repeal them with a two-thirds vote from each chamber over a one year period (thus far, the Congress has not done this). In Mexico, budget reallocations are reviewed retroactively by the legislature, such that the Executive must report these changes in quarterly reports and the Commission on Budget and Public Accounts can comment on them.

The relatively more active role of the legislatures in Brazil, Chile and El Salvador has been reflected by the enactment of various laws with budgetary implications, such as:

Apart from Argentina and El Salvador, all countries surveyed have created special legislative commissions to monitor the emergency. These commissions analyze, evaluate, investigate and hold informative meetings. However, their discussions are not binding or required.

In addition, some countries have created new monitoring and oversight mechanisms within the laws that created funds for specific purposes, approved special regimes or required accountability to oversight entities. In Chile, for example, the Executive Branch must inform the Chamber of Deputies on the use of the Guarantee Fund for Small and Medium Entrepreneurs and the implementation of the Emergency Family Income. In Brazil, the extraordinary fiscal, financial and contracting regime that by law will prevail during the state of emergency can be suspended by Congress in the event of irregularity or non-compliance with the limits imposed. The Congress of Peru established by law measures for the constant oversight of the Comptroller General of the Republic, which is in charge of monitoring the entities that receive public resources. In El Salvador, the Assembly created by law a committee with representatives from government, the private sector and civil society responsible for overseeing the use of the Emergency, Recovery, and Economic Reconstruction Fund, although it currently is not operating due to resignations by some members.

The initiatives to strengthen accountability on the government’s response to the pandemic — like the requirement in Chile that the Executive report to Congress on measures created to mitigate the economic impacts of the emergency — seem promising and could serve as inputs for a sustained oversight system in the future.

Haste should not sacrifice transparency, oversight and accountability

The pandemic has confirmed that, while it is imperative to address the crisis and its impacts rapidly, it is equally crucial to maintain strong democratic processes that guarantee transparency and accountability. The legislature has a key role in guaranteeing that emergency measures take place within a framework that respects the division of powers and guarantees the right of citizens to monitor government actions.

The first few months the pandemic present concerning trends in the Latin American region regarding budget oversight and accountability. The Executive has broad powers to address COVID-19 and, although some legislatures have responded to this by leveraging or creating oversight mechanisms, their role thus far is inferior to what is expected of these institutions.

Although in certain countries this situation is not very different than before the crisis, the pandemic presents opportunities to strengthen the role of legislatures, particularly their oversight of emergency measures. They should do this by:

The efforts made today to enhance the role of the legislature as critical institutions when evaluating and checking the role of the Executive could have positive effects not only in the immediate future, but also over the long term.