Building coalitions to promote equitable taxation beyond the COVID era

This piece is co-published with the International Centre for Tax and Development.

Since its onset, governments the world over have responded to the COVID-19 pandemic by ramping up spending and providing tax relief to ailing families and businesses, even in the face of dwindling revenues. This has inevitably led to widened fiscal deficits and ballooning public debts. For a crisis of such large and unknown proportions, these extreme measures are more than justified.

What is not clear, however, is what will happen once the health emergency subsides, and governments are left with the task of returning public finances to a more stable and sustainable path. Will they decide to continue providing basic income support to people living in poverty and widening access to health services, or will the response turn to strict austerity measures? Can the crisis open up space for a more equitable and inclusive approach to fiscal policy, recognizing and addressing the inequalities that the pandemic has made ever starker and more apparent?

The answers depend in part on how governments approach tax policy. Raising additional revenues will be a necessity for governments as soon as the worst of the crisis is over. Proposals on how to ensure new revenues are collected in a more equitable and efficient way are already being put forward. Mick Moore and Wilson Prichard of the International Centre for Tax and Development (ICTD) laid out a particularly clear and comprehensive agenda pointing to tax reforms that reflect a new fiscal contract, prevent a further worsening of inequality and help to address other societal problems like climate change. In their view, the crisis presents an opportunity to promote a more fundamental shift in the ways in which governments collect revenues. 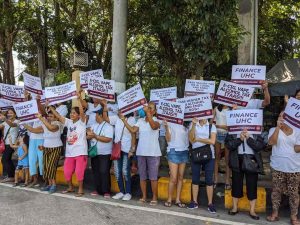 The real challenge lies in understanding how best to overcome the political opposition that tends to accompany large-scale reforms for more progressive and equitable tax systems. In many countries, political and economic elites are likely to resist new or increased taxes on wealth, while corporations and high-net-worth individuals are likely to use various tactics—including political pressure—to keep their tax bills low. In the immediate aftermath of the crisis, the targeting of wealthy individuals and businesses may face particular political resistance as these groups cite recent economic losses as justification for their inability or unwillingness to pay. At the same time, there is a risk that increased pressure for revenue will simply lead to greater revenue extraction from those that are less politically influential and more vulnerable, including individuals and businesses in the informal sector.

If we are serious about promoting more equitable and progressive taxation as part of post-COVID recovery strategies, we need to start thinking now about how to build the coalitions that can put pressure on governments to make better choices and withstand inevitable opposition.

What might these coalitions look like? And what role can citizens and civil society organizations (CSOs) play in them? An ongoing project at the International Budget Partnership’s new Tax Equity Initiative is looking at successful civil society engagements on tax reform across the world. While the case studies will only be finalized later in the year, IBP recently convened researchers and CSOs to discuss preliminary findings and emerging cross-country themes and lessons.

Evidence from the eight cases suggests at least four ways in which civil society-led coalitions can help shift popular perceptions of taxation and move the political needle on reforms:

It is clear that civil society has a critical role to play in both advocating for more equitable tax systems and supporting greater taxpayer engagement to support that advocacy. To get to post-crisis tax systems that are more equitable and that embody a shift in the terms of the fiscal social contract, the time to build broad coalitions in support of progressive tax reforms is now. Otherwise, a great opportunity to revolutionize how governments collect revenues and use them to reduce inequalities might go missed.