Finally, the time is ripe for SAI-civil society collaboration 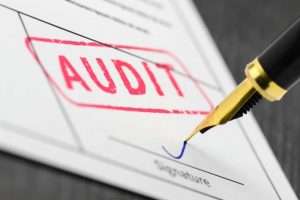 It was the summer of 2006. Two key staffers from the International Budget Partnership, Warren Krafchik, our executive director, and Vivek Ramkumar, senior director of policy, attended a meeting co-organized by IBP with the U.N. in Manila. The focus: to build on a paper Warren had authored several years before about the benefits of collaboration between civil society organizations (CSOs) and supreme audit institutions. SAIs, as they are called, are charged with monitoring the accuracy of government reporting on the spending of public money. And increasingly, they also assess “value for money” in government programs—a key interest of CSOs.

Over breakfast one morning—just about an hour before the meeting was scheduled to start—Warren sat at a table with a senior staff member from the South African auditor general’s office. The auditor stated rather bluntly that he was skeptical about such a partnership. After all, he said, SAIs must maintain objectivity and neutrality; they shouldn’t be influenced by members of “the public,” who have their own biases.

“That seemed rather ironic, since the auditor was also reading a newspaper, and thus he was clearly open to being influenced by the publication’s ‘take’ on the news,” Warren remembers. “How is that really different from a discussion with civil society organizations about their experience? You can process that input just as you process what you read.”

Still, the breakfast conversation proved to be prophetic. The time was not yet right. 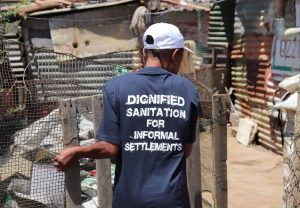 Fast forward to June 2020 and a well-attended webinar hosted by the Capacity Building Committee of the International Organization of Supreme Audit Institutions (INTOSAI). In that webinar, Kimi Makwetu, the current auditor general of South Africa (the same agency that was so “cool” at that long-ago breakfast in Manila), described relations with citizens as a “new terrain” that is “one of the four strategic pillars” of his institution. In fact, Makwetu recently recorded a video with IBP’s South Africa office and the Social Audit Network, saying this about their work to involve residents of informal settlements in service-delivery evaluation: “We can never be sure if all that should be disclosed to communities is actually disclosed. This helps us get closer to people who are not decision-makers but who are on the receiving end of those services.”

Makwetu is not alone. Also participating in the INTOSAI webinar were representatives from SAIs in India, the Philippines, Jamaica, the Netherlands and Peru.

“We’re seeing a new openness in the audit community to trying to strengthen engagement with the public and civil society,” observes IBP’s Claire Schouten, who coordinates our audit accountability initiative. “We think there is now a great opportunity to build trust, while enhancing our respective roles in the overall accountability ecosystem.”

How did we get from that 2006 breakfast in Manila to this reality today? Persistence was key. IBP and many of our partners knew the benefits could be substantial. CSOs can benefit from SAIs’ access to government officials, financial records, and the skills needed to analyze them. SAIs can benefit from CSOs’ greater latitude when it comes to pressuring governments to act.

For example, in Ghana, a national CSO went to court and won a verdict allowing the national SAI to recoup the cost of expenses incurred illegally by government agencies. As a result, the SAI recovered approximately $12 million of misappropriated funds. Another early champion was one of IBP’s partners in Latin America, Asociacion Civil Por la lgualdad y la Justicia (ACIJ). ACIJ mobilized Argentine civil society and media to ensure the government acted on audit recommendations to address the country’s troubled train service. These examples of success helped make the case, over time, for collaboration. 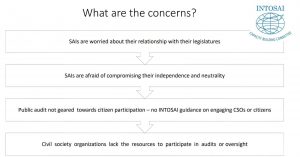 However, in budget work, it’s important to take the long view. It can seem like we take two steps forward, only to be forced one step back. The development of IBP’s work with the SAI community is a case in point.

In 2009, three years after that initial, 2006 meeting, the U.N. Department of Economic and Social Affairs (DESA) secured a slot for IBP to speak at the triennial congress of INTOSAI in Mexico, where our team presented the argument in favor of transparency and public participation for audit institutions. This time, the event produced an invitation from INTOSAI to form a joint initiative to advance the issue.

The field began to evolve more quickly during the last few years. One trigger for this accelerating progress was the engagement of the INTOSAI Development Initiative—which provides capacity-building support—with UNDESA on sustainable development goals. That work provided the SAI community with much greater exposure to the international development world, in which civil society organizations are major players. At the same time, SAIs were increasingly thinking about the value they add to society—the focus of a special INTOSAI working group IBP was invited to join.

Another important influence is the donor community.

“Traditionally, a lot of the funding for technical assistance to SAIs has been channeled through donors, and they are getting impatient about the lack of results,” notes Vivek. “What is the point of improving the capacities of auditors if it is not translating into shifts in government behavior? So, they are receptive to initiatives that look at audit effectiveness from the broader framework of accountability rather than simply satisfaction of international auditing standards.”

Meanwhile, the large, emergency spending shifts required due to the COVID-19 pandemic has given auditors a new visibility. “Suddenly, they have become the institution everyone is expecting to hold governments to account for these huge sums of money being spent on emergency stimulus programs,” notes Vivek. “SAIs are being seen as a lot more relevant than before. Now they need to seize the moment to showcase their value in these troubled times.”

Good examples of the need for accountability watchdogs, and their value when they meet the challenge, are everywhere—including the United States. The U.S. Government Accountability Office issued a comprehensive report on the nearly $3 trillion in coronavirus relief spending approved by Congress in March and April. One of the findings: The federal government sent relief payments to almost 1.1 million dead people, totaling nearly $1.4 billion. The International Monetary Fund now is calling for audits to be conducted on COVID spending in every country. Earlier, during another epidemic, Sierra Leone’s SAI burst into national attention when its audit revealed that 30% of funds spent to fight Ebola had not been properly documented.

But audits are only useful if governments act on audit recommendations. This does not occur in many countries, in part due to SAIs’ limited ability to pressure governments to take their audits seriously. IBP believes CSOs can help SAIs secure more government responsiveness. To pilot this idea, IBP is collaborating with SAIs and CSOs in five countries:

“Auditors are increasingly receptive to the idea of engagement with civil society organizations,” concludes Vivek. “But they have questions around how that is best done. Those questions are very similar to what we have heard from finance ministries about how to engage with the public. We think that it is important that as auditors become more interested in public participation, they don’t just implement tokenistic procedures, but ones with potential for real impact.”