ASHA workers lead the way in the fight against COVID-19

It’s mid-day in the Wagajwadi village of Pune district of the western state of Maharashtra. A group of women has gathered in front of the panchayat office – the formalized local self-governance system in India at the village level. Kalpana Tai (or elder sister), a 40-year-old village community health worker, (an  Accredited Social Health Activist, commonly referred to as ASHA worker) leads the group as they wait to meet the Village Panchayat Head and secretary. This is probably their fifth visit to the office and, with every visit, the number of women has only increased as they demand food supplies for 45 tribal / Adivasi families living in their village. These families fall under the special category of “Particularly Vulnerable Tribal Group” (PVTG) and face significant challenges accessing subsidized food supplies provided to the poor through the government’s Public Distribution System. Until now these families have been subsisting as forest dwellers or eking out a living as daily contractual workers in the informal sector. The COVID-19 pandemic has heightened their already vulnerable health conditions 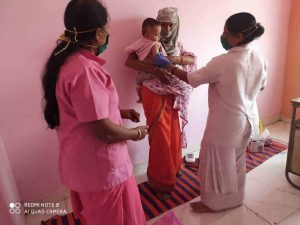 and restricted their movement, further compounding their challenges and leaving them with no food or livelihood options.

Uplifting the most vulnerable
Over 40 percent of the Scheduled Tribe (ST) population live below the poverty line versus 20.5 percent of the non-tribal population. PVGTs are the most marginalized among Scheduled Tribes and are characterized by a pre-agricultural level of technology, a stagnant or declining population with extremely low levels of literacy and subsistence economy. Limited studies on the health and nutrition status of PVTGs indicate that they have a significantly higher proportion of tuberculosis, severe hypertension, illnesses requiring major surgery and are more vulnerable to communicable and non-communicable diseases than non-tribal populations.

SATHI, the International Budget Partnership’s (IBP) long-standing partner based in Maharashtra, India has been working toward a comprehensive health systems reform. One of their strategies is building community-based accountability processes that increase community ownership of public health facilities and service provider responsiveness. SATHI has also built reform coalitions with frontline health workers, panchayat members, community-based organizations and others and bolstered the capacities of frontline health workers, such as ASHA workers. Under the government program, National Health Mission, ASHAs are contractual government workers and form the backbone for delivery of many critical government programs focusing on healthcare and nutrition, including COVID-19 related surveys. Health activists have long argued that ASHA workers are overworked, underpaid and at the bottom of the health service delivery system hierarchy, with little agency and bargaining power. It’s not surprising that all ASHA workers in the country are female.

Kalpana’s story
Kalpana Awhale volunteered to become an ASHA worker in 2008 and single-handedly shoulders the responsibility of all the health needs of her village. With SATHI’s support, Kalpana has built her capacity to not only provide improved health services but also understand that the government must provide health services to all. Additionally, she has come to recognize the importance of ensuring participation and inclusion, especially of the most vulnerable, in budget decision-making processes at the community level. 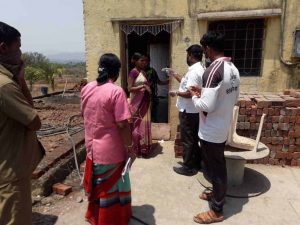 In response to the COVID-19 pandemic, the government mobilized one million ASHA workers as “corona warriors” to be part of “containment and surveillance teams.” Since then, Kalpana has been making regular home visits, creating awareness among residents on hygiene standards, demystifying COVID-19, providing necessary medication and making referrals to the Primary Health Centre for severe cases. With continued support from SATHI, Kalpana has been able to make significant change to ensure the most vulnerable residents can access relief programs, health care, and nutritious food. Kalpana’s successes include:

Helping malnourished children. Kalpana mobilized the village panchayat members to each take care of a malnourished child, who were at increased risk of severe malnutrition due to the suspension of nutrition and preventive health care services during the lockdown.

Protecting each other. The state of Maharashtra has been one of the worst hit by COVID-19 with more than 0.7 million cases reported. While quarantine protocols have been established for residents traveling back to the village from the cities, it quickly became apparent that ensuring social distancing was almost impossible, threatening the health of the entire village. After coordination between Kalpana and the village panchayat, a Member of Legislative Assembly provided a quarantine facility outside the village and nutritious meals three times a day.

Caring for tribal families. After initial unsuccessful negotiations with the male upper caste-dominated Village Panchayat to get additional support for tribal families facing declining health, Kalpana mobilized the village women and demanded that funds be released from the revenue officer and the Block Development Officer. Their efforts paid off with funds for food items worth Rs. 4,000 ($50) being distributed to 88 families (45 PVTG and 43 Dalit families). SATHI’s training enabled Kalpana to recommend that the village use resources provided by the Union government as untied funds to spend on local priorities, bringing immense relief to these families.

The power of local leaders 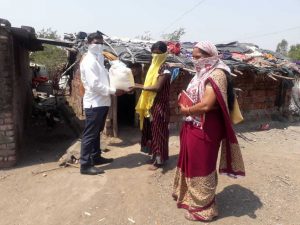 Kalpana came to her village as a young woman and today she has fought, survived and succeeded in establishing herself as a leader in the upper caste male-dominated village. Over the years, she has learned to negotiate with casteist and patriarchal power structures to serve and lead the community. Over the years, people have come to trust and depend on her and she’s seen not only as a community health advocate but also as Tai, who will be there for all those in need.