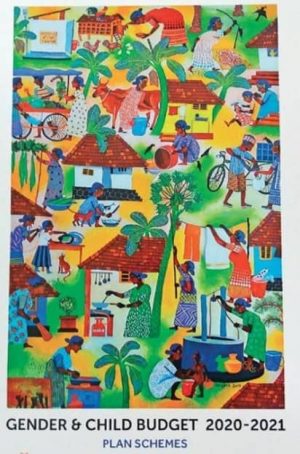 What is the first thing that comes to your mind when you see this image?

It’s  a vivid depiction of an Indian village, with images of women working – domestic chores of cooking, cleaning, attending to children, shopping for food, milking the cow and so on. None of this work is paid.

This painting by 14-year old Anujath Sidhu Vinayal from Thrissur in the southern state of Kerala is the cover for the “Gender and Child Budget 2020-21”. It shows the state government’s intent to recognize women as workers and to present policy measures to advance this shift.

Anujath has been painting since he was four years old. His painting titled, “My Mother and Mothers in the Neighborhood,” is a tribute to his mother, who died last year. Just days after her death, this painting won an international award. This beautiful painting highlights the need to create avenues to promote women’s equal participation in the economy.

Gender budgeting has a long history in India. It all started with the Indian government constituting a “Committee on the Status of Women in India” (in 1971) in response to a request from the UN to commemorate the International Women’s Year in 1975. The Committee report called Towards Equality  examined the constitutional, legal and administrative provisions that have a bearing on the social status of women, their education and employment, and their implications.

Twelve years later in 1986, 27 schemes where beneficiaries could be counted, were picked up to be monitored and direct funds for women. Another eleven years later, in 1997, Women’s Component Plan (WCP) was introduced to earmark at least 30% of Plan funds by government departments perceived to be “women-related.”

The next two decades saw many developments – deepening of WCP at state and Union level, coupling WCP to Gender Budgeting (GB), recognizing the importance of Gender Budgeting in the 2001 “National Policy for the Empowerment of Women,” piloting gender budget analysis for national Budgets in 2000 by National Institute of Public Finance and Policy (NIPFP) – a think tank that assists Union, state and local governments frame public policies – and constituting Gender Budget Cells in 2004-05.

All these efforts led to a commitment to institutionalize GB. Gender Budgeting is an analytical tool to scrutinize government budgets from a gender lens, recommend more programs that directly benefit women and call for their better implementation.

That GB is not a separate budget for women is an important caveat. It is an approach to understand the gender-differentiated impact of budget making and implementation. It also goes beyond public expenditure analysis and looks at government’s resource mobilization efforts and policies from a gender lens.

Last year (2019), India’s Finance Minister in her Budget Speech announced setting up a committee to evaluate 15 years of gender budgeting. As Indian economist, Ashok Lahiri said, “…the progress has been mixed. There is satisfaction to be derived from the fact that gender budgeting has been sustained for the last 15 years. Not only has it been sustained but it has even spread to subnational governments including states and union territories…”

Lahiri also credits various arms of the government – Ministries of Finance and Women & Child Development, Comptroller and Auditor General, Planning Commission – as well agencies such as UN and NIPFP for this progress. It is to the credit of women rights’ networks, allies amongst legislators and policy research organizations such as CBGA (a longstanding IBP partner) whose continued scrutiny and independent analyses led to deepening of gender budgeting as an approach.

In September, the High Court in Tamil Nadu, another southern state, ruled in a judgment valuing a woman’s unpaid labor more than earning family members. Also in September, India’s National Statistical Office released its report on a Time Use Survey for the period January to December 2019. The Survey, a first in 20 years, measures people’s participation rate and time spent on paid, unpaid and care activities. Unsurprisingly, it shows the extent to which gender determines how people spend their time. But it also reveals the impact of other factors such as class, caste and geography, on time use. This inequality clearly has a negative economic impact on women.

Approaches such as GB can be further deepened, be it by ensuring data integrity, consistent reporting, focus on outcomes and not on outlays, and most of all, recognizing the intersectionality approach to underpin this exercise to bring about meaningful changes in the lives of girls and women who are also Dalits, Adivasis, persons with disabilities, homeless and transgender people.