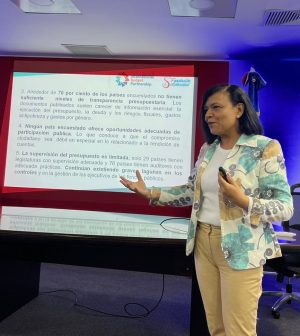 Each month, we shine a spotlight on partners who are using budget advocacy to bring transformational change to their communities. This month we’re spotlighting Katia Lambis, budget expert and OBS consultant, from Fundación Solidaridad in the Dominican Republic.

This interview was translated to from Spanish.

A: Fundación Solidaridad, founded in 1990, is a non-profit institution based on the principles of solidarity, equity and participatory democracy. We support citizens to play an active role in their collective wellbeing. For 30 years, the organization has developed projects to strengthen the advocacy capacity of civil society organizations in promoting transparency, oversight and accountability, among other issues.

Q: How did the Dominican Republic fare in the OBS 2021?

A: The country made significant progress, ranking ninth in the list of countries that exhibit the greatest budget transparency globally and as one of the 17 countries that publish all eight national budget documents.

Q: In what ways has the Dominican government shown improvement compared to its previous OBS ranking from 2019?

A: The country’s transparency score improved from 75 to 77 due to progress that was made in the availability and comprehensiveness of information provided in national budget documents. Regarding budget oversight, we also observed an increase from 57 to 63 points thanks to actions carried out by Congress and the audit institution (the Chamber of Accounts). However, we should note that the public participation score decreased from 31 to 22 points because opportunities for citizen participation were not provided during the formulation and approval of the budget.

Q: The Dominican government established public consultations during budget implementation to strengthen public participation in the budget process. This is a great start but what else can it do to further bolster the public’s involvement in budget matters?

Q: How does the Dominican Republic use the OBS findings to improve its open budget practices?

A: With each OBS publication, the results have allowed the Dominican Republic to identify areas for improvement in its budgetary practices and implement policies to address weaknesses.

The institutions responsible for the budget’s preparation have made available to the public several instruments to support the Citizens Budget, such as a guide to understanding the budget, explanatory videos and infographics with weekly, monthly and quarterly reports on budget execution that allow citizens to evaluate the performance of spending measures.

Thanks to Fundación Solidaridad’s advocacy, and the results of the OBS 2021, the government is motivated to continue working towards increased transparency and oversight, and to formalize channels for public participation in budget matters. We continue to organize dialogues with Congress and the Chamber of Accounts to promote greater detail in budget information and increased spaces for public participation. We will keep working towards progress.