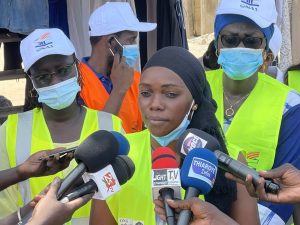 Each month, we shine a spotlight on partners who are using budget advocacy to bring transformational change to their communities. This month we’re spotlighting Magatte Diouf Cisse, program coordinator at Urbasen, a Senegalese organization bringing together professionals working in urban management in informal settlements. Urbasen works in close collaboration with the Federation of Senegalese Inhabitants, an umbrella organization of women’s associations and community leaders in informal settlements.

Fighting for safe water and sanitation in Senegal

Magatte walks the busy, unpaved streets of an informal settlement in Pikine, Senegal with one thing on her mind: water. This urban planner-geographer knows well that people living in Senegalese informal settlements have little access to basic sanitation services such as toilets and clean water. Without a way to evacuate rainwater, flooding is a constant problem and makes living conditions unsafe. “The homes of informal settlement residents have been built in a way that puts them at constant risk of flooding,” Magatte said. “Moreover, there are no individual toilets or communal toilet blocks, not to mention running water. These basic sanitation services are missing entirely, resulting in public health problems and a lack of dignity.”

The government launched the Ten Cities Program to connect these households to the sewage system at a subsidized rate and build toilets in public areas. However, at the beginning of 2021, hundreds of thousands of residents had not benefitted from the program because only those households that pay a subscription to the water provision and management company were included and most informal settlement residents cannot afford the subscription fee even when it is subsidized.

We partnered with Urbasen and FSH to conduct a social audit of sanitation services in informal settlements. The aim was to collect data that would shine a light on how many residents were not benefiting from the Ten Cities Program and to advocate for increased budget allocations for these essential services. IBP assisted Urbasen in strategizing how to collect and utilize the data in their advocacy campaigns. “IBP has helped us build the capacity of grassroots movements to better understand the budget process [and advocate for] municipalities to provide services to informal settlements,” Magatte said.

As a result of the social audit and engagements with public sanitation officials, 880,000 informal settlement inhabitants are now benefiting from improved flood management and public sanitation infrastructure installed in May and June 2021. Also, 20 km of the 28-km public sanitation network was rehabilitated, cleaned and prepared to evacuate rainwater, making the informal settlements safer and more flood-resistant “Urbasen’s participatory and inclusive approach in informal settlements, which are often overlooked by public policies, was a big reason for my decision to join this organization,” Magatte said. “Seeing people access essential services such as sanitation, supporting them in the management of their neighborhoods, and knowing that they are now capable of influencing government decisions gives me the strength to get up every day and fight to claim their right to the city,” she said.

Urbasen is continuing to use social audits – community mapping and field visits to collect qualitative and quantitative data – to ensure it has robust information to present to government when it makes demands for the provision of sanitation services. Through data it is now able to “make visible” communities that have long been ignored and denied due access to services municipal officials are meant to deliver, such as clean water and sanitation.