In South Africa a range of civil society organizations and coalitions have been central to post-Apartheid efforts to protect vulnerable children through social security grants. This case study describes how the persistent campaigning of these organizations has contributed to significant budget and policy changes over the last decade such as the expanded eligibility for the Child Support Grant.

The full version, short summary, and one page summary of this case study are available in English. Summaries are also available in: 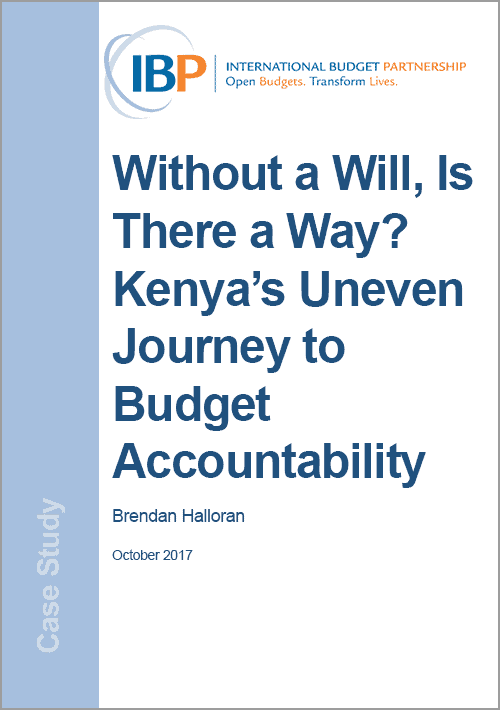 Without a Will, Is There a Way? Kenya’s Uneven Journey to Budget Accountability

Following post-election violence in Kenya in 2007, the country underwent a reform process that included the development and passage of a new constitution in 2010. The reforms included a major decentralization effort through the creation of a new two-tiered system of government that established 47 counties. Among other goals, the reform aimed to promote democratic and accountable governance and ensure the equitable sharing of national and local resources.

This shift created new spaces and processes for citizen engagement in governance and in decision making about public resources such as the County Budget Economic Forum (CBEF) which provides a legally mandated space for government to consult with citizens and civil society groups on budget planning and management. However, the actual functionality of these mechanisms remains low, and there are few incentives for governments to make these channels meaningful forms of engagement. This has forced civil society to learn to adapt their approaches, sometimes after investing significant time and effort in a seemingly promising avenue of engagement.

Such is the case with the work of IBP partner Kerio Center in Uasin Gishu to ensure resources in the county budget for persons living with disabilities. This case study explores their work. 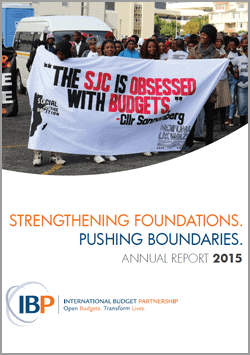 May 2015 | by The International Budget Partnership

The International Budget Partnership’s 2015 Annual Report documents our work over the past year, focusing on what we have achieved and what we have learned. Highlights include a section describing our ongoing work and impact in six countries, an overview of our 2015 research and international advocacy, six essays that discuss key lessons that have come out of reflecting on our work, and six short stories and vignettes that capture the power of budget work. 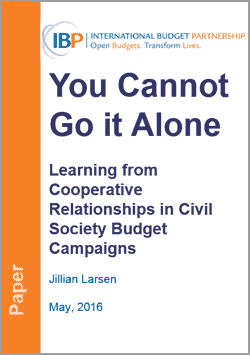 The International Budget Partnership has spent almost a decade researching how and why civil society campaigns on budget-related issues succeed or fail. Based on the findings of nearly 30 case studies spanning five continents, this paper synthesizes what we have learnt so far. It focuses particularly on the relationships between civil society organizations (CSOs) and both government and non-government stakeholders, establishing a typology of these relationships, and examining how and why they contribute to successful budget campaigns.

The main finding is that, when it comes to budget campaigns, CSOs cannot go it alone. Cooperation from either elite stakeholders, a wider network of non-state actors, or both, is crucial. Campaigns that failed to forge strong cooperative relationships were found to have much weaker outcomes. Those that were able to sustain relationships while adapting to ever changing circumstances exhibited the strongest outcomes. 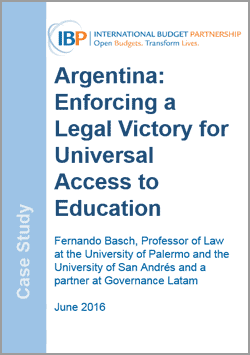 Argentina: Enforcing a Legal Victory for Universal Access to Education

Public interest litigation can be a powerful tool for holding governments to account. Yet ensuring lasting change in government policies and actions often requires more than a win in the courtroom. This case study recounts the Civil Association for Equality and Justice (ACIJ) campaign in Argentina to push the City of Buenos Aires to comply with its legal obligation to provide free public education to children between the ages of 45 days and five years. While the campaign is ongoing, ACIJ has already managed to secure more places for students, better spending on infrastructure, and a new system of online enrollment.

The success of ACIJ’s campaign hinged on its ability to adapt to a dynamic political environment, changing tactics where appropriate. Responding to a breakdown in the formal mechanisms for monitoring government compliance, the ACIJ lobbied both the executive and the legislature, took further legal action, and mobilized public support through the media and other advocacy efforts.