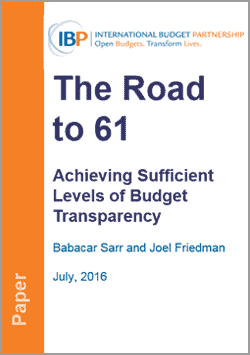 Over the last decade, successive rounds of the Open Budget Survey (OBS) have shown that the average level of budget transparency around the world is modestly increasing. This progress has mainly been driven by countries that started from a very low base, as reflected by their low scores on the Open Budget Index (OBI). However, a significant number of countries persist in providing only limited amounts of budget information to the public (scoring between 41 and 60 on the OBI).

Using data from the last four rounds of the OBS (2008, 2010, 2012, and 2015), this paper closely examines these countries whose scores place them in the middle of the OBI. It seeks to answer what these countries can do to increase their OBI scores above 60, a rough benchmark for when a country can be considered to be publishing sufficient budget information to permit informed public discussions on budgetary matters.

Is it a matter of simply publishing more documents? Or must the comprehensiveness of the documents that are published be improved? And how should reforms be sequenced?

The analysis also draws on six case studies of countries that have been in the middle of the OBI for the last four rounds of the OBS and five case studies of countries that had been in the middle category before boosting their scores above 60. By comparing different trajectories and examining different blockages, this paper aims to chart a path for countries to boost their OBI scores and begin to publish sufficient amounts of budget information to allow for informed public debate.