This case study details the findings and examines the impact of the Argentina General Audit Office’s (AGN) March 2012 report pointing out irregularities concerning maintenance and procurement issues related to train services provided by the private company Trains of Buenos Aires (TBA). The audit report was issued just days after a fatal train accident in which a train operated under a contract held by TBA crashed into the Once station in Buenos Aires, killing 52 and injuring nearly 800 passengers. Though the AGN had previously issued audit reports pointing out similar issues related to train services provided by TBA, its March 2012 report, coming just days after the Once tragedy, had a much greater impact. It received widespread media coverage and broad citations from the judiciary, lawyers for the victims’ relatives, and civil society organizations. 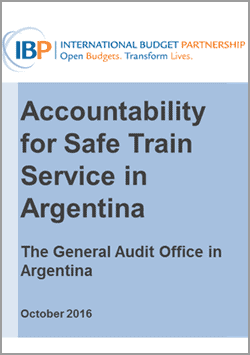