The International Budget Partnership’s Ask Your Government! initiative began in January 2010, when 100 civil society organizations launched an ambitious effort to document public access to budget information in 80 countries. The core question behind the effort was simple: What happens when citizens ask their government for specific budget information relating to key international development commitments to which the government is a signatory?

The answer is that most of the time, governments do not respond with sufficient information — or at all. In fact, when governments were asked six questions by their citizens about how much money they spend on development priorities, only one of the 80 countries provided substantive answers to all six questions.

Citizens used official channels to request information from government agencies and were diligent in following up these requests. Many went to great lengths to insist that government make the required information available, often visiting ministry offices on multiple occasions. The majority of governments questioned in the Ask Your Government! initiative did not adequately respond to citizen demands for access to public budget information. This finding indicates a major problem for transparency and accountability.

Access To Budget Information: The Six Questions And The Logic Behind Them

Because governments fulfill their policy goals and commitments in large part through decisions about how to raise and spend public funds, budgets are at the heart of the Ask Your Government! initiative. The partners in this research and advocacy initiative asked their government to provide specific budget information for six questions covering issues relating to maternal health, aid effectiveness, and environmental protection. Organizations in these fields played an important role in defining the focus and ultimately designing the six questions that were asked from all 86 governments.  The questions posed were:

Q1. What was the total amount actually spent nationwide during the last two fiscal years on purchasing/procuring each of the following medications: magnesium sulphate used for eclampsia, and uterotonics used for post partum hemorrhaging? Please specify which uterotonic (such as oxytocin, misoprostol, ergometrine, etc.) was purchased. Please also include amounts spent by sub-national governments, or indicate clearly if you do not have this information.

Q3. What was the total amount of overseas development assistance received during the last fiscal year from the European Development Fund, the World Bank, and the following three US government agencies: the President’s Emergency Plan for AIDS Relief (PEPFAR), the Millennium Challenge Corporation (MCC), and the United States Agency for International Development (USAID). Were you notified and if so, what were the dates (month and year) on which each of these agencies notified you (recipient government) about the assistance?

Q4. What is the total amount of overseas development assistance committed for the next three fiscal years by the European Development Fund, the World Bank, and the following three US government agencies: the President’s Emergency Plan for AIDS Relief (PEPFAR), the Millennium Challenge Corporation (MCC), and the United States Agency for International Development (USAID). Were you notified and if so, what are the dates (month and year) on which each of these agencies notified you (recipient government) about the assistance?

Q3. What was the total amount of overseas development assistance actually provided during the last fiscal year (not your fiscal year, but the fiscal years of each of the relevant recipient government) to each of the following governments: Rwanda, Liberia, Ethiopia, Colombia, and Vietnam, and what were the dates (month and year) on which you notified the governments about the assistance?

Q4. What is the total amount of overseas development assistance committed during the next three fiscal years (not your fiscal year, but the fiscal years of each of the relevant recipient government) to each of the following governments: Rwanda, Liberia, Ethiopia, Colombia, and Vietnam, and what were the dates (month and year) on which you notified the governments about the assistance?

Q5. As a share of the national budget, what was the total amount actually spent on all national agencies in charge of environmental protection and conservation during the last two fiscal years?

Q6. What was the total amount actually incurred during the past three fiscal years on subsidies for oil, gas and coal production and consumption?

To learn more about the logic and desired response for each question, read this document.

The goal of the Ask Your Government! initiative was to illustrate the real-life experiences of citizens going through the process of requesting budget information from their governments. Results of the initiative offer concrete evidence on the problems civil society faces in accessing public budget information in a wide range of countries.

Based on these criteria, government responses were grouped into four categories:

All questions were answered, and all requested budget information was provided:

Only one country, New Zealand, answered all six requests substantively, by providing budget information that clearly answers the questions posed. Requests to the New Zealand government needed to be submitted only once, and responses were provided quickly, in a succinct and easy- to-understand format.

All questions were answered, but not with all the required budget information:

An additional 22 countries (28 percent of the total) offered an official answer to all six information requests, though with varying degrees of comprehensiveness: Armenia, Bosnia-Herzegovina, Bulgaria, Canada, Colombia, Costa Rica, Croatia, Georgia, Germany, Guatemala, India, Kazakhstan, Mexico, Moldova, Montenegro, Namibia, Philippines, Russia, Serbia, Slovenia, South Africa, and Ukraine. Despite responding formally to citizens’ information requests, all of these countries struggled to provide some of the required budget information. Key pieces of the requested budget information were not provided, not available, not held centrally, or not organized in a way that allowed the responsible agencies to respond to the question as it was posed.

Only some of the questions were answered, and not all of the budget information was provided:

Some countries provided comprehensive answers to a few questions, while ignoring others, or provided incomplete information to four or less questions. On balance, researchers were provided with only a portion of the budget information requested. In many cases, requests were met with answers promising that the information would be delivered, or that researchers should return (sometimes repeatedly) at a later date.

Many responses indicated that the agency in question did not possess the information requested.

None of the questions were answered and no budget information was provided:

In 11 countries (14 percent of total), government agencies did not respond to any of the six information requests: Algeria, Bangladesh, Cameroon, East Timor, Iraq, Liberia, Nicaragua, Nigeria, Trinidad and Tobago, Venezuela, and Yemen. These included cases where access to budget information was explicitly denied, or where the requests were ignored, or where no response at all was made to the researcher who had posed the question. 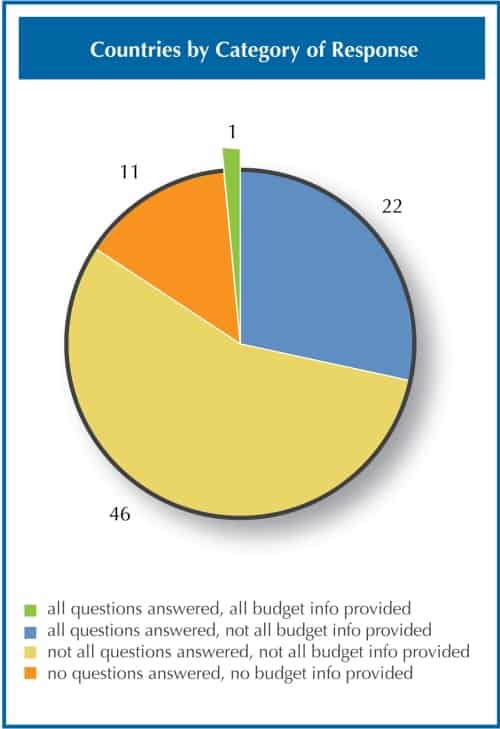 See the results by question in each country »

Implications for Budget Transparency and Accountability

The Ask Your Government! results show that good practice is possible even in contexts of low capacity and scarcity.

Ultimately, Ask Your Government! is a test of government responsiveness to public enquiries for budget information. Unfortunately, the majority of governments – across the development spectrum – performed poorly. When governments fail to respond or provide incomplete responses to their citizens’ requests for information, the implications for budget transparency and accountability are of great concern.

Public debate about the investment of public funds in development is enriched by informed citizen participation. After all, informed citizens are best positioned to make demands on how the government can be more responsive to their needs. And they hold information that can improve the quality of public service delivery. If the government limits citizen participation by restricting access to information, citizens forgo their right to participate, and the quality of service delivery is likely to be compromised.

Whether officials declined to provide the information, or the government agency was not able to produce a timely or complete response, the end result is that citizens are not informed about how public funds are spent. This gap is particularly troubling when the information sought relates to governments investments in development. Questions related to public investments in reducing maternal mortality are revealing in this respect. Many Ministries of Health reported that information detailing public expenditures on life-saving maternal health drugs is not held centrally. Ten African countries with the highest maternal mortality rates in the world did not even bother to respond to these questions.

This fact sheet summarizes the findings of the Ask Your Government! initiative where 100 civil society organizations asked their governments for specific budget information relating to key international development commitments in 80 countries. A table shows how often citizens were actually provided with the budget information they requested as well as significant variation in how government agencies within a country responded to the information requests. A list of the participating organizations and recommendations on how to improve budget transparency and accountability are also provided.

The following documents are the Information Request Protocols that were provided to the researchers in all 86 participating countries. Written by freedom of information experts at Access Info Europe and the Centre for Law and Democracy, the Protocol was drafted based on international best practices and established standards regarding the right to access public information. The purpose of the Protocol is to guide the process of formally submitting information requests for each question to the responsible government agencies. Options are provided for procedures in countries with and without access to information laws. Guidelines were also provided for following up on each request, and keeping detailed records of the process and experience for each participating organization. To learn more about the process outlined for requesting information see this flowchart.

The Ask Your Government Initiative aims to reveal the extent to which governments are actually fulfilling their commitments in the areas critical to development, such as maternal health, aid effectiveness, and environmental protection.  As part of the initiative, five partners in Kenya, Malawi, South Africa, Uganda, and Zambia recorded audio diaries of their efforts to request and obtain budget information from their governments on these issues.  Based on the audio diaries, the IBP produced a five-part series of radio programs.  Meet the researchers in these countries as they tell their stories, find out if their governments answered their questions.

This slide show on the Ask Your Government! initiative summarizes the main goals and achievements of this effort as seen through the eyes of the five African researchers in Kenya, Malawi, South Africa, Uganda, and Zambia who recorded audio diaries of their efforts to request and obtain budget information from their governments on areas critical to development, such as maternal health, aid effectiveness, and environmental protection.