Light of Hope was founded in 1999 as a charity association with the mission of helping people living with HIV/AIDS in the Ukrainian city of Poltava and the surrounding region. Over time its mission, and the range of services it has provided, has expanded to encompass other marginalized groups. The organization began to work with people struggling with substance abuse and then former inmates. Light of Hope eventually became one of Ukraine’s largest and most successful non-state service delivery organizations. In 2011 it embarked on a pioneering campaign to collaborate with the city government of Poltava. This case study examines the Light of Hope’s efforts to establish the Poltava Social Adaptation Center, which received unprecedented fiscal support from the local government. It documents how Light of Hope managed to successfully establish a facility to deliver a complex array of services to ex-prisoners, drug users, people who are HIV-positive, and the homeless. Light of Hope was able to garner an unprecedented level of support from the city government for the center, including funding from the city budget. In the process, the organization also challenged the stigma surrounding marginalized groups. This case study provides useful lessons for service delivery organizations seeking a wider strategy for winning social change. 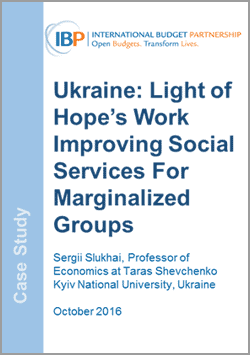