September 2016 | by Brendan Halloran, IBP (adapted from a longer study by Padmaja Nair) 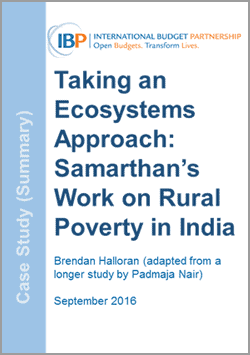 Despite years of strong economic growth in India, rural poverty still affects tens of millions of households. In 2005, the government created the Mahatma Gandhi National Rural Employment Guarantee Scheme (MGNREGS) to address rural poverty. The scheme, which commits the government to providing adult members of rural households with 100 days of paid work, should provide a revolutionary safety net for rural households. Yet corruption, insufficient administrative capacity, a lack of awareness among many rural inhabitants, and manipulation by influential political and economic actors have undermined it.

Samarthan, an organization dedicated to pursuing more inclusive development in the state of Madhya Pradesh, has worked to realize the scheme’s potentially transformative promise. It has pursued this aim through an evolving understanding of the challenges and opportunities inherent in the complex system of actors, processes, and tools. This case study summarizes Samarthan’s approach, the role of IBP in supporting the organization, and describes the impacts and lessons learned.