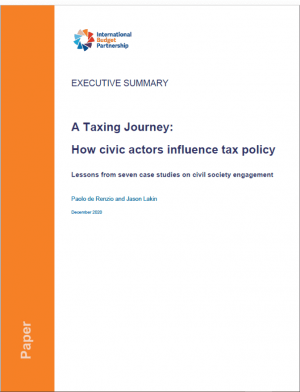 This paper synthesizes the findings from what, to our knowledge, is the first set of in-depth case studies on civil society engagement in tax reform. In these cases, we look at campaigns promoted by civic actors in seven countries that either proposed and pushed for specific tax reforms or opposed reforms that had been introduced by the government.

Regular citizens and civic actors have historically played a very limited role in the formulation of tax policies. In recent years, however, interest in the role that civil society can play in tax reform has been growing steadily, driven by the domestic resource mobilization (DRM) agenda linked to the Sustainable Development Goals (SDGs) and by recent efforts of international non-governmental organizations (NGOs)—in collaboration with country-level groups—to reform the rules of international taxation.

To document successful examples of civic tax advocacy and generate useful lessons for other organizations interested in this work, we commissioned in-depth case studies of the Yellow Vests movement in France, tax administration reforms in Guatemala, the invalidation of a double taxation agreement between Kenya and Mauritius, the fight against opacity of tax amnesties in Mexico, the increasing of “sin taxes” and oil excise taxes in the Philippines, opposition to new taxes on mobile money transfers and social media in Uganda, and advocacy of higher income taxes on wealthy individuals in three US states. Evidence from these case studies also help fill a gap in the existing literature on the political economy of tax reform, which does not cover the role of civic actors in any level of detail.

The cases show that civil society engagement in tax reform can play a role in making tax systems fairer and more equitable while generating revenues to finance important public services. More importantly, they help us to understand the types of strategies and tactics that very different organizations and movements use to engage with very different types of tax reform. Not all our cases are unqualified successes: what they demonstrate, rather, is that tax reform is a longer-term process defined by a mix of failures and partial successes, as well as more resounding victories. These cases help us to think about tax reform over time, rather than as a single moment, and therefore nuance our understanding of the role of civil society and the meaning of successful tax advocacy.

How did civil society groups across these cases engage with tax reform? The evidence we gathered highlights five themes, which also point to useful lessons for other tax advocacy initiatives:

Narratives, messaging and media. Tax reform is a battle of ideas. It requires tax advocates to craft narratives about the need for changes in tax policy and to be able to communicate them effectively by using different media in a strategic way. These narratives need to be powerful and convincing enough to counter and neutralize those used by opposing actors, such as the argument that low taxes are vital for economic growth. The first narrative that was used in the campaigns we cover is about promoting fairness and equity, arguing that the burden of taxation should be distributed fairly and that those that have more should pay more (or at least pay everything that they owe). The second narrative is related to the idea that governments need sufficient resources to adequately fund public services, either through direct earmarking or through an increase in general revenue collection. A third narrative—used by a smaller number of groups—is linked to the need for more transparency and for clear anti-corruption measures in tax administration. These narratives helped CSOs frame issues to win the policy argument and galvanize supporters and were more often used conjointly as complementary arguments, rather than in isolation. Beyond crafting narratives, though, civic actors need to be able to disseminate and amplify their messages through different types of media to make sure they reach their intended audience.

Choosing the right strategy. Our case studies find civic actors exploiting a wide array of venues for advocacy, from working directly with the executive, to lobbying legislators, to trying to influence public opinion through organizing events and working with the media, to taking governments to court. The most successful organizations use multiple strategies, rather than rely on just one. Successful cases seem to deploy a mix of “insider” and “outsider” strategies, supporting and lobbying governments directly on reforms, but also applying external pressure on them through mobilization, protest, lawsuits, and media campaigns. Not all strategies are available in all contexts, of course, but civic actors should start with the assumption that they must diversify their strategies and pursue multiple approaches, knowing that only some of them may eventually succeed.

Building effective coalitions. A critical strategic consideration in tax reform is to identify both allies and opponents. The key to success is building coalitions with allies that are powerful enough to overcome resistance from opponents. To confront reform resistance—coming mostly from governments and the business sector—civic actors in our cases built coalitions with a wide range of actors. Some built relationships with parts of government or business, taking advantage of splits within these actors. Others appealed to civic actors or movements that were not specifically interested in tax policy but were mobilized around a broader vision of government and public services. In some cases, civic actors were able to galvanize support from both these directions.

Capacity, capacity, capacity. Engaging in tax reform debates often requires high levels of technical capacity—both in the economic and legal spheres. However, technical capacity is only one of three different types of capacity that are important for successful tax advocacy. Based on our case studies, civil society groups also use political capacity to engage with various actors both within and outside government, and communications capacity to effectively disseminate research findings and reform proposals, and to craft forceful narratives and relay key messages to target audiences. In cases where not all types of capacities are available within a single organization, as will very often be the case, partnerships and coalitions can help address important gaps. Most of our cases indicate that successful organizations engage in long-term advocacy agendas involving significant learning and capacity augmentation over time. At any given moment, therefore, a capacity to learn and adapt may be as important as other kinds of capacity.

Political opportunities. Advances in policy reform often occur at specific points in time when unanticipated changes shift the balance of power and relative influence of key policy actors, alter public perceptions and affect government priorities; these key moments open up opportunities for advocates to step in and push for change. Some of these changes may come from the ballot box, or when corruption scandals hit the headlines. When opportunities arise, civil society must be prepared, or risk having to wait a considerable time for another window to open. This means working over the longer-term to build capacity, media networks and potential coalition partnerships that can be mobilized at opportune moments. Our cases suggest that it is those civic actors who make such long-term investments that are best situated to make progress when the right moment for reform arrives.

Tax advocacy is a long-term endeavor, requiring significant commitment over time from civic actors—and accordingly, sustained support. Success may come only after repeated failures, but those failures can help navigate to more effective pathways and ultimate success.

We hope that these findings and lessons from pioneering groups—and the much richer evidence in the full write-up of their cases—will provide other civic actors with inspiration and the motivation to pursue tax advocacy across different country contexts and ensure that citizens across the world have the voice that they deserve in shaping government tax policies.

A full synthesis paper documenting the studies is available here, along with summaries of each country case study. 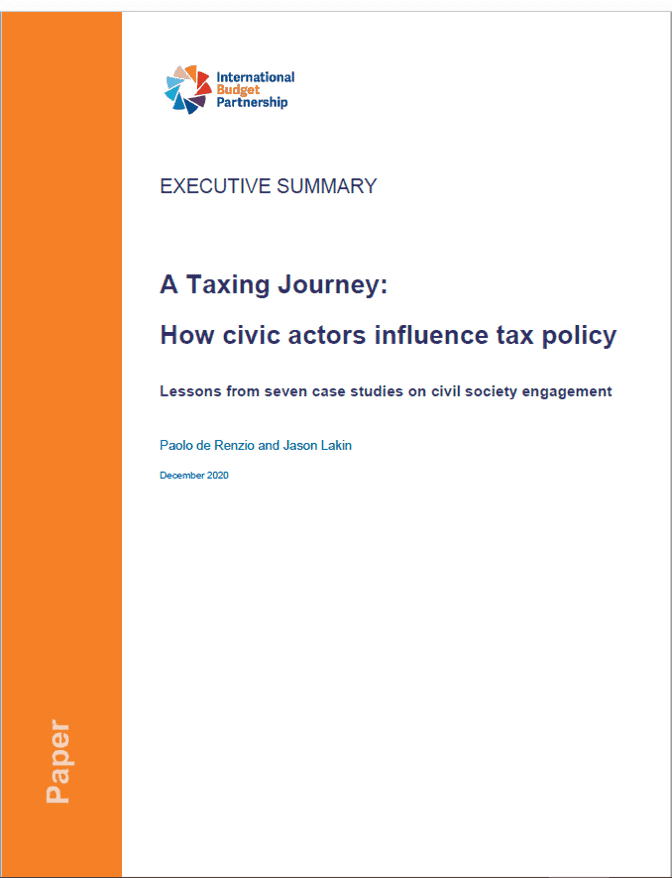