Honduras: The Fragility of Gains in Budget Transparency 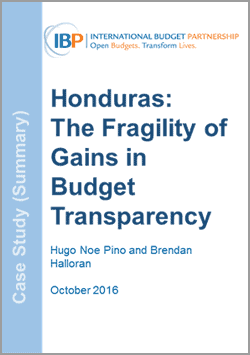 Honduras once stood out as example of how rapidly improvements in budget transparency could be made. In 2012 IBP praised the country for the exceptional gains it made on the Open Budget Index (OBI), when its score jumped from 11 in 2008 to 53 in 2012. Yet just a year later, amidst a period of troubled politics, the county suffered a series of setbacks that led to a tightening of the executive’s grip on the budgetary process and to freedom of information being restricted. This was reflected in its OBI score in 2015, which fell to 42.

In hindsight it seems likely that Honduras’ initial gains on the OBI were related to the need for the then government to shore up its international reputation and credibility following a military coup that ousted a democratically-elected president. This case study examines the background to the rise and fall of budget transparency in Honduras. It presents a cautionary tale about the dangers of “open washing,” and about political manipulation disguised as a window of opportunity.