France: The Yellow Vests and their social media-driven tax revolt

In late 2018 and early 2019, a diffuse social movement known as the Yellow Vests (gilets jaunes) organized protests in France against various regressive tax policies. Initially spurred by an increase in fuel prices due to higher taxes introduced by the Macron government, the movement incorporated many lower income and rural citizens who had never been politically active before and who rejected all links to existing political parties and trade unions. They were motivated by a deep sense of unfairness, believing that elites were harassing them through higher taxes without anything in return. The protesters eventually augmented their initial demand to repeal the fuel tax by demanding the reintroduction of wealth taxation and the organization of citizen referenda to inform future policy choices.

The French tax system is characterized by high consumption and local taxes. Although the country enjoys robust social spending programs, its tax system is less redistributive now than it was in the past. Since the early 2000s, the country’s value-added tax has accounted for around half of all tax revenues (outside of social insurance taxes). In addition to the VAT, taxes on petroleum products and tobacco have increased substantially over the past several decades; both fall disproportionately on lower-class residents in rural areas. At the same time, the country’s wealth tax has been sharply contested since its introduction in 1981. Right-wing parties have long fought for its repeal—succeeding once, briefly, before it was reinstated—while left-wing parties have campaigned on expanding its rate and reach.

In 2017, Emmanuel Macron proposed to replace the wealth tax with a real estate asset tax, gradually abolish the local housing tax for most residents, and (in a nod to green concerns) increase environmental taxes. At the same time, his government introduced a package of pension and social insurance reforms that reduced benefits for current retirees. Macron’s new taxes on fuel consumption included numerous business exemptions; as a result, the increase primarily affected rural households, where car use was most prevalent.

Such was the context in which the Yellow Vest movement emerged onto the political scene in 2018, bringing disaffected retirees and rural laborers—as well as others angry at the government—into the streets. Though there were protests prior to the introduction of increased diesel prices in September 2018, the latter gave momentum to what became the Yellow Vests movement. In October, a maintenance technician posted a video to social media calling for motorists to display their yellow safety vests (required by law to be carried in vehicles) as a way of registering their opposition to the new tax. The next month, via a Facebook event, a truck driver called for a blockade of public roads.

The organizers of the Yellow Vests movement rejected all links with formal organizations, such as political parties and trade unions; they relied solely on social media to spread their message and organize protests around the country. Mainstream media gave the movement more visibility than its support may have warranted: coverage was continuous even as the number of demonstrators involved in the Yellow Vests movement quickly declined, from 300,000 during the first week of protests to 166,000 the following week, and several tens of thousands by January. Contributing to this decline was the refusal of organizers to develop a broader coalition, or even to adopt a message that would resonate beyond the parochial concerns of their most committed protesters. In addition, while initial media coverage helped amplify the movement’s messages, over time media reporting on a limited number of violent acts and the bigoted remarks of some participants undercut their support.

The Yellow Vest movement incorporated into its ranks several alienated groups, mainly in rural areas, who had not previously been involved in political protest. The movement drew on retirees and low-paid workers who no longer felt able to live on what they earn from their work; by donning the high-visibility vest, they were able to rediscover a form of dignity and recognition. The imperative of tax justice helped unite the movement; the reintroduction of the wealth tax quickly emerged as the best way to “make the rich pay” and thus became a rallying slogan. Initial protests also demanded Macron’s resignation, but eventually the Yellow Vests coalesced behind two main reforms: the reintroduction of a wealth tax, which they saw as a symbol of basic fairness, and the introduction of citizen referenda for policy changes, which they hoped would ensure their voices were heard in future reforms.

Over time, the main opposition political parties attempted to appropriate the popularity of the movement (except for the Greens, who remained resolutely hostile to a protest triggered by criticism of the carbon tax). The far right attempted to link the Yellow Vests to the struggle against immigration. The socialist left attempted, unsuccessfully, to redirect the protest energy toward a referendum on reintroducing the wealth tax. Union leaders were divided: some viewed the movement as potential allies against tax injustice and in favor of public services, while others objected to the movement’s anti-tax ideology and sought to distance themselves.

Faced with the public popularity of the Yellow Vests movement, Macron ultimately offered some economic concessions. In a televised speech in December 2018, he announced a series of “emergency economic and social measures”: freezing fuel tax increases, freezing certain energy charges, increasing the minimum wage by 100 euros for all employees, and cancelling some of the pension changes for low-income retirees. He also offered an alternative political opportunity to the referenda: a series of public meetings held across the country, at which citizens were invited to debate. These meetings were well attended: over 10,000 local meetings were held across the country, and the website set up by the government gathered over 1.4 million contributions. However, some issues were excluded from consideration—most notably, the reintroduction of the wealth tax was not within the scope of debate. On this question, for both political and ideological reasons, Macron never wavered.

The Yellow Vests movement was partly successful.  Although they achieved their initial goal of reversing the fuel tax increase, many Yellow Vests clearly wanted more than this. Its protests captured the attention of all the major media, even though the number of demonstrators never exceeded 300,000, in a population of over 66 million. However, neither of the two main policy demands that emerged over time from the protests—the reinstatement of the wealth tax and the organization of citizen referenda to address future policy changes—were implemented. And none of the demands of the Yellow Vests resulted in significant political reforms.

The movement was resolute in its opposition to “inside” advocacy strategies: when the prime minister offered to receive representatives from the Yellow Vests in December 2018, the scheduled meeting was called off due to threats and intimidation targeted at those who planned to attend to represent the movement. Recurrent violence and clashes during its demonstrations contributed to diminishing the movement’s legitimacy, and its systematic refusal to form alliances with political parties and trade unions—or to enter into talks with the government—ensured that the Yellow Vests movement would remain a revolt by a minority. By refusing to appoint leaders interested in entering policy negotiations, the Yellow Vests movement failed to impose real tax reform. Its main success was giving voice to an invisible working class and popularizing the theme of tax injustice, which remains at the heart of the public debate in France.

The Yellow Vests are unique among our cases in that they represented an organic movement rather than a professional civic organization or coalition of organizations. While the movement never became institutionalized like other organizations we feature, the ways in which it was able to harness social media—and traditional media—highlight both the potential and pitfalls of alternative forms of civic organizing around tax reform.

The movement demonstrates that ordinary citizens can impact tax reform even when they lack technical and political capacities that are often deemed essential. The Yellow Vests relied almost exclusively on social media to drive influential organizing and protest efforts. While this was enough to force the government to drop a contentious tax change, it was not enough to bring it to the table to negotiate the movement’s more proactive agenda around citizen referenda, nor was it willing to yield on the wealth tax.

In part, the stymied progress on their demands was due to the movement rejecting the idea of negotiation. The Yellow Vests also rejected other strategies used by civil society organizations across our cases, such as building coalitions, working with legislators, or using the courts. The movement’s social media approach was successful despite, rather than because of, a lack of campaigning tools online that might have helped to sustain and grow it. While there are many movements around the world that have been spurred by online organizing, most fizzle out quickly. Our other cases demonstrate that tax reform is a long game and requires organizing and campaigning over time. In turn this suggests a different set of capacities, including a more deliberate approach to online outreach.

This summary is derived from Alexis Spire’s case study paper: “The Yellow Vests: A French cry for tax justice.” 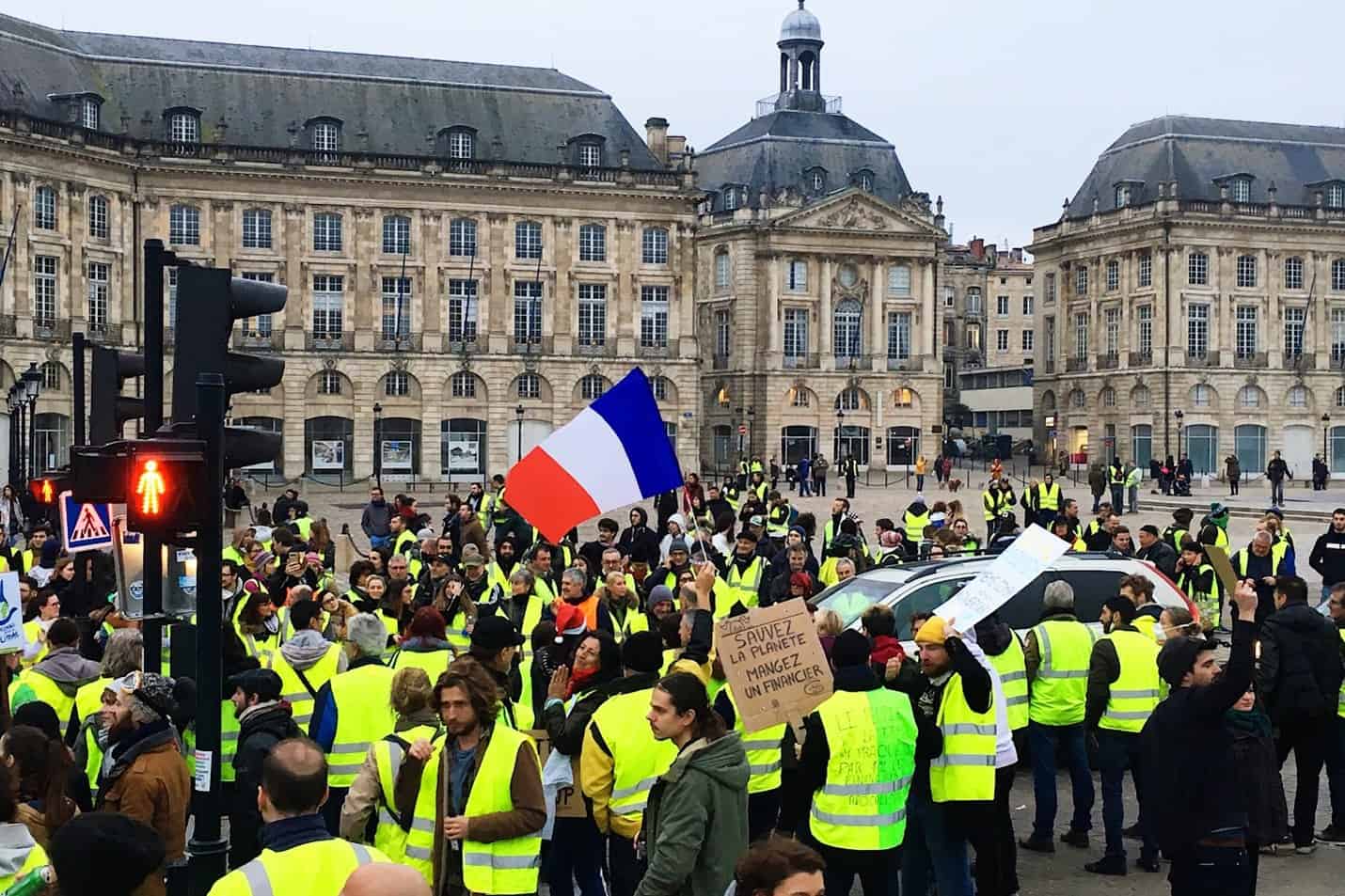