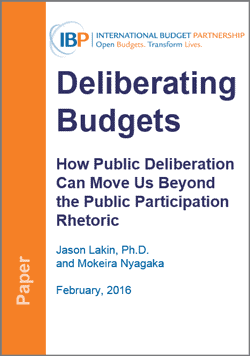 Over the past several years, Kenyans have engaged in a vibrant debate about the meaning of public participation in government decision-making, particularly with respect to the budget process.  This debate has taken place amidst widespread disappointment with the quality of public participation as it is currently practiced at both national and county levels.

In this paper, the authors argue that the concept of public participation needs to be refined. They propose that the concept of public deliberation is more useful and, ultimately, offers more specific guidance for thinking about how the public engages with budgets. Drawing on the concept of deliberative democracy, the authors argue that it requires government to make proposals, justify those proposals, and create space for not just the proposals but the justifications to be debated.  The proposals and justifications must be relevant and plausible, must be open to change, and must be based on broad concepts of public welfare, such as equity and fairness, and not reducible to self-interest.

The authors also investigate whether Kenya’s national and county budget documents produced since 2013 meet these standards and finds that in most cases they do not.  Many of these documents are not readily available to the public, and those that are often lack basic descriptive information about the government’s proposals.  Those that do have detailed descriptive information often lack relevant justifications for the decisions they contain. Where there has been an attempt to offer justifications for the decisions made, they are often too vague to actually explain these decisions.

The paper concludes by arguing that we should assess all government documents and government “participation” processes by the exacting standards of public deliberation, using existing laws to do so.  The biggest impediment to public deliberation in Kenya today is not the absence of law, but the lack of sufficient demand from organized citizen groups for greater transparency and more serious deliberation in the budget process.