How Much Money is Allocated to Informal Settlement Upgrading in Cape Town, South Africa? An Analysis of the City’s Draft Budget for 2017/2018 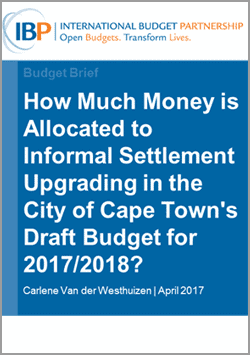 The most recent statistics from South Africa’s 2011 Census show that 20.5 percent of the City of Cape Town’s households live in informal housing. Specifically, 13.5 percent of households are spread across 204 informal settlements, while 7 percent live in informal backyard dwellings. These informal settlements generally lack adequate municipal services and community infrastructure to ensure a decent quality of life for the people living in them.