Kenya: How Much for Counties in 2017/18? The Commission on Revenue Allocation Versus the National Treasury 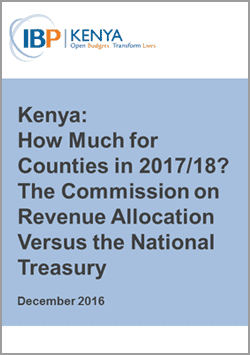 This analysis compares the recommendations from CRA and National Treasury and raises issues for consideration by Parliament. It also considers the recently released Division of Revenue Bill 2017, which adds some additional details to the Budget Policy Statement 2017 proposal from Treasury. Three key points emerge:

1. As in previous years, Treasury and CRA disagree about how much money counties should receive; this is due to different revenue growth factors and differences in funding for additional road and library functions devolved to counties. While CRA’s proposal may be optimistic about revenue growth in 2017/18, Treasury’s approach gives too little to counties in light of its own revenue projections and is inequitable.

2. Allocations to conditional grants seem arbitrary and in some cases do not cater for the rising costs of the services they are meant to fund.

3. For most grants, the distributional criteria remain vague, but CRA has proposed a fairer distribution of the Level 5 grant, one that does not discriminate against larger facilities with higher inpatient numbers as in previous years.