The Nairobi-based Tax Justice Network Africa (TJNA) is a Pan-African research and advocacy group established in 2007 to curb illicit financial flows and promote progressive taxation systems in Africa. Partnering with 32 organizations across the continent, TJNA brings together diverse individuals and organizations to strengthen tax regimes promoting domestic resource mobilization. The organization aims to produce knowledge, organize campaigns and promote dialogue to influence policy in four areas: (a) tax and the international financial architecture; (b) tax and extractives; (c) tax and inequality; and (d) tax and investment. It is in this last area that TJNA has taken up the issue of double taxation agreements, highlighting how unfavorable agreements signed by African governments erode their tax bases and impede states’ ability to deliver services.

In 2014 Tax Justice Network Africa (TJNA) launched an historic legal challenge to a double taxation agreement that Kenya’s government signed with the tax haven of Mauritius. The government argued that the Kenya/Mauritius Double Taxation Avoidance Agreement (KE/MA DTAA), the most recent of ten such agreements signed in the last decade, strategically positioned Kenya as a commercial hub akin to Mauritius. Backers of the agreement claimed Kenya needed the deal because African peers, including South Africa, Senegal, and Tunisia, had made similar pacts to stimulate foreign investment, making Kenya less attractive by comparison.

However, many experts have linked DTAAs to tax avoidance, evasion and revenue losses, thereby questioning whether the alleged investment gains outweigh the decline in tax revenues. As TJNA director Alvin Mosioma put it: “Evidence has shown that contrary to their objectives, these DTAAs have led to double non-taxation and resulted in massive revenue leakage for African countries.”

After the government published a legal notice to bring the tax treaty with Mauritius into effect in May 2014, TJNA identified both substantive and procedural problems with the agreement.  Substantively, the treaty would lead to significant revenue losses. It would undercut the government’s ability to collect capital gains taxes. It also created loopholes for domestic Kenyan investors who could dodge local taxes by “round-tripping” their investments through a Mauritius shell company. As in other problematic treaties, only foreign companies with a “permanent establishment” in Kenya would pay taxes on many services. The treaty generously allowed companies to undertake considerable business activity without qualifying as “permanent establishments.”

In terms of process, TJNA argued that the adoption of the treaty fell afoul of the constitution because the executive did not adequately consult with parliament or the public. On both procedural and substantive grounds, then, TJNA wanted the agreement revised, or scrapped. And they demanded that any revised treaty comply with the legal ratification procedure for an international tax agreement signed by Kenya’s government.

TJNA began its campaign against the double taxation agreement with Mauritius by building coalitions with local civil society organizations and drawing on expertise from international NGOs addressing economic justice issues.  These relationships helped fill in capacity gaps at TJNA around tax treaties.

International partnerships were critical in the campaign’s research phase, providing training and support for the TJNA team.  For example, the Global Alliance for Tax Justice (GATJ) supplied research on DTAA impacts and connected TJNA with international specialists to formulate arguments to the high court. Action Aid drew on its global experience to highlight treaty shopping and revenue loss concerns. Econews Africa helped develop briefing materials for civil society allies, parliamentarians, and the media.

In addition to building partnerships with civic actors, TJNA directly advocated with the executive, legislature, and the private sector, though these efforts were not successful enough to stop the tax treaty from coming into effect. During parliamentary hearings, TJNA realized lawmakers’ understanding of tax issues was limited. While TJNA believed in the importance of educating legislators on tax treaties, time was running out to cultivate champions before the agreement came into effect.

The campaign was more successful in engaging with civil servants at the Kenya Revenue Authority (KRA). Some professionals within KRA were receiving international support around this time and becoming more aware that some of the tax treaties signed by Kenya included problematic loopholes.  They raised their concerns with TJNA.  Still, they declined to publicly join TJNA’s campaign to revise the agreement with Mauritius.

Given the fact that the DTAA was to come into effect almost immediately, TJNA ultimately decided to pursue public interest litigation, the right to which was created by the 2010 constitutional reform in Kenya. In October 2014, partnering with Katiba Institute—a CSO set up to promote implementation of the constitution—TJNA moved to the High Court of Kenya to challenge the entry into force of the Kenya/Mauritius DTAA.

The petition had one immediate impact: the court suspended the DTAA, as it could not enter into force until the court had examined the petition and delivered a final decision. That decision only came five years later. Ultimately, the justices found that the government had failed to follow the law mandating that the executive place such agreements before parliament within seven days (Statutory Instruments Act). Consequently, the DTAA with Mauritius was nullified on procedural grounds.

Although TJNA won its case, the court’s dismissal of their substantive claim, that the DTAA was in contravention of the Constitution because it caused an excessive loss of revenue, was a disappointment to campaigners, as it undermined their broader argument and could prevent them from stopping future agreements.  The court also failed to sustain TJNA’s claim about public participation, concluding that the government had met the minimum requirements for such participation.

TJNA’s campaign against the DTAA was a partial success.  The courts delayed the treaty from coming into effect while they considered it, and eventually invalidated it.  On the other hand, a few months after the ruling, Kenya’s president, bolstered by a parliamentary majority and little opposition, signed another similar treaty with Mauritius. Because the judicial decision neither mandated broader public participation nor challenged the treaty on substantive grounds, it could not prevent the government from moving ahead with a new treaty.  And since there was no broader coalition or social movement organized to resist the treaty, the campaign ultimately relied exclusively on the court case to win the battle.

Nevertheless, the campaign was successful in several other ways.  It set a new precedent that public interest litigation could be brought by civil society around a tax issue, and particularly around an area typically dominated by the executive: treaty-making.  TJNA formed bonds with some parts of the KRA, which was beginning to take a closer look at how the government drafted this and other DTAAs.

TJNA’s profile, and the profile of the issue of DTAAs, was boosted, making it easier to pursue future advocacy in this area.  And indeed, in late 2020, TJNA took the government back to court over not one, but ten tax treaties.  Not only did TJNA pave the way for more litigation, but they also forced government to open the DTAA process.  In July 2020, the National Treasury requested public comments on new DTAAs with Singapore and Barbados prior to pushing through the agreements. Therefore, this case shows the potential of civic actors using the courts to promote more open, effective and equitable tax processes and systems by forcing a review of tax treaties and other policies.

This case offers lessons across several domains of civil society tax advocacy. First, the case shows the courts’ power to intervene in tax policy, an area that many civic actors have never considered or utilized. In this case, pursuing court action was possible because of Kenya’s relatively progressive constitution and relatively autonomous judiciary, factors that do not exist everywhere.  As always, civic actors must consider context when selecting a strategy.

TJNA’s campaign was weaker in narrative building and media engagement.  It struggled to build a broader constituency around the opposition to DTAAs or connect the revenue losses from such treaties to issues concerning ordinary Kenyans, such as underfunding of basic services.

Another lesson from the case is that civic actors should not rely too heavily on litigation alone as their approach to tax advocacy, because governments still must feel some social pressure to implement court decisions and to change strategy. While TJNA did build coalitions with other civic actors, it faced challenges due to its position as a regional actor more than a domestic one.  Organizers needed to work more closely with domestic actors to reach other groups and local media.

On the other hand, the case shows how TJNA did build relationships with part of the government, even as they protested executive actions.  Engagement with tax authority personnel concerned about revenue losses led some staff from KRA to privately encourage the activists to go to court.  And the litigation seems to have strengthened KRA’s position in preparing future tax agreements vis-à-vis the National Treasury.

TJNA did not initially possess all the capabilities required to take this case forward. Still, it showed itself to be a highly adaptive organization that worked with others and built capacity through a process that could be used in subsequent advocacy work.  The pleadings that TJNA filed in the case were not as strong as they could have been, given the difficulty of finding legal counsel that understood both tax policy and public interest law.  But learning through action has allowed TJNA to take forward its agenda more strategically in subsequent battles over tax.

This summary is derived from Joy Waruguru Ndubai’s case study paper: “Petitioning the Double Taxation Avoidance Agreement between Kenya and Mauritius: The Role of Public Interest Litigation as a Tool for Tax Justice Advocacy.” 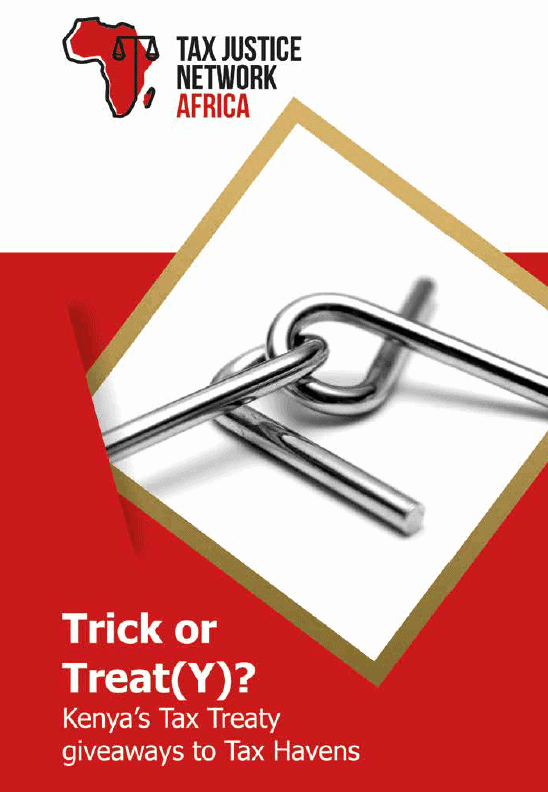