“That’s How the Light Gets In”: Making Change in Closing Political Environments

Over the past 20 years, the International Budget Partnership has worked with hundreds of independent organizations the world over to pioneer models of open budgeting, where citizens and civic organizations play an informed and meaningful role in monitoring and influencing the public budget. Our ultimate goal is to ensure that governments make and keep commitments to maximize the contribution of public resources to transforming the lives of poor and marginalized communities. Too often, though, we have secured dramatic increases in public data and built strong organizations but have failed to transform these resources into greater accountability.

While fighting for fiscal accountability, we have weathered numerous setbacks and regressions in many of the countries we work in, as well as a fair amount of lip service to open government. But we have also come to rely, perhaps too much, on what seemed an inevitable albeit gentle trend toward greater openness in government.

2016 was a tumultuous period in much of the world. An increasing number of countries in the global north and south experienced dramatic shifts toward more reactionary and intolerant politics. The current context makes this task even harder: How do we advance fiscal accountability in an era of closing government?

Against this background, we decided to go beyond a summary of our activities and accomplishments for our 2016 Annual Report to examine evidence of how to pursue fiscal accountability in a tougher political environment. In these darkening days, we nonetheless see powerful instances of ingenuity and openings at both international and country levels. From the grassroots to global boardrooms — and in the interplay of the two — there is evidence of even stronger fiscal accountability work emerging. We aim to document some of these trends in this report.

In the campaign for open budgets and greater government accountability, there are many fronts. The essays in this volume not only document potential individual points of engagement but also show the multidimensional nature of budget work and democratic engagement. This complexity is a strength in these difficult times and presents opportunities for IBP, its in-country partners, and the many international organizations with which we are aligned. 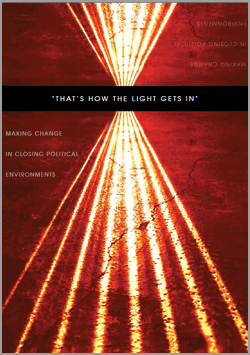