How Can Government Foreign Debt Operations Be Made More Transparent?

Emerging market economies are increasingly turning to international capital markets to finance their budget deficits and support their development needs. Unfortunately, in some cases, these arrangements have caused controversies. Allegations of mismanagement of sovereign bonds issued or guaranteed by the governments of Kenya, Mozambique, and Malaysia have received widespread media coverage and highlight important challenges for fiscal transparency and countries’ development prospects.

This Budget Brief examines government operations in international capital markets in Kenya, Mozambique, and Malaysia to assess whether they suffered from a common set of problems. The breif also highlights how limited transparency contributed to the mismanagement of the monies raised by the three governments, and proposes a set of transparency and accountability measures that could potentially mitigate problems in government operations in international capital markets. 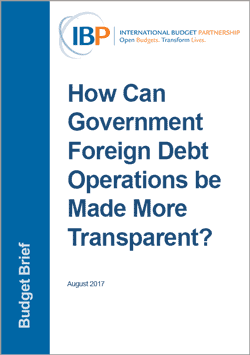