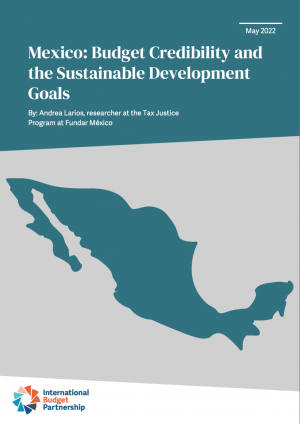 The advancement towards achieving the Sustainable Development Goals (SDGs) is an important priority for the Mexican government – at least on paper. Although multiple tools and strategies have been implemented to continue prioritizing SDGs on the public agenda, public attention is more centered towards programs aimed at reducing inequalities, poverty and fighting corruption. The government has implemented an SDG database that lists their programs contributing toward the SDGs, and detailed data on government budgets and expenditure related to each sector is also published annually. However, many governments deviate from planned budgets during implementation, a challenge known as budget credibility, which can result in shortchanging or deprioritizing spending in social sectors. The SDGs recognize this challenge with tracking indicator 16.6.1, which looks at government expenditure as compared to the approved budget. However, budget credibility is not a topic that is discussed often in public debate in Mexico, which focuses more on challenges of limited fiscal space in the federal government budget.

This brief examines Mexico’s federal budget from 2018 to 2020. It finds no evidence that the Mexican government is prioritizing resource allocations and implementation to accelerate the compliance with SDGs, except on social protection. Compared to other countries, Mexico generally implements the budget as planned, with actual expenditure averaging only 1.4% above the approved budget (overspending) between 2018 and 2020. There are, however, some sectors that consistently underspend year after year that may raise concerns about SDG progress. For example, there is a close relationship between underspending and downward SDG Index trends in the sectors of agriculture and nutrition, as well as environment. Download the paper.