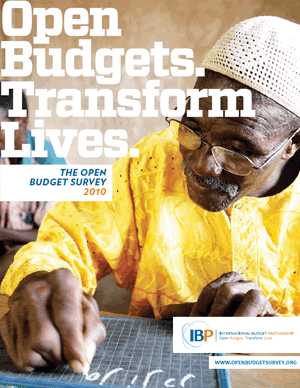 This abbreviated report focuses on key findings from the Open Budget Survey 2010.

Download the data tables from the 2010 Open Budget Survey report.

Based on inputs received from researchers and extensive in-house reviews, the International Budget Partnership (IBP) has made three changes in the methodology applied to its Open Budget Survey, which is the basis for the Open Budget Index (OBI). The first change concerns the timing of the release of the eight key budget documents assessed by the Survey. The second change is the inclusion of the enacted budget in calculating country scores for the OBI. The third change is based on comments received from experts from Brazil and Nigeria that resulted in revisions to the answers of a few questions used to assess these countries.

Learn more about the research methodology used for the Open Budget Survey 2010.

IBP provided researches with these Open Budget Survey Questionnaire Guidelines which described the method to be used in completing the questionnaire and defined the types of evidence to be provided.