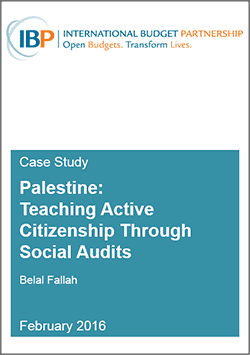 In much of the West Bank, particularly in areas such as Awarta and Nablus, there are rampant problems in the funding and delivery of government services and infrastructure projects. These problems range from general mismanagement of funds to outright corruption. In response, the Teacher Creativity Centre (TCC) launched a project to mobilize students to conduct social audits of public services. Integrity Action, a nonprofit organization registered in the United Kingdom, supported TCC through funding for the campaign activities, help in shaping the audit tools used by students, and by providing guidance on monitoring.

Over a period of four months, the TCC mobilized groups of students from 58 secondary schools, exposing a host of problems and advocating for their solutions. Some groups significantly improved infrastructure in their communities. Others were less successful — a lack of information and concerns about exposing too much undermined the potential of their work culminate in change.

This case study was commissioned by IBP’s Learning Program in cooperation with Integrity Action. It demonstrates the challenges and benefits of involving students in strategies for social accountability.