The Road to Budget Transparency in the Philippines

After languishing in the “limited” category on the Open Budget Index for nearly a decade, the Philippines managed to achieve a score of 64 in the 2015 round. Up from a score of 48 in 2012, the country ascended to the rank of 21st in the world, fourth in Asia, and first in Southeast Asia. On the surface, the Philippines improved its transparency rating simply by publishing all eight key budget documents. However, beneath that surface is a story of how key actors in the government bureaucracy took action to fulfill the promise made by the administration at that time to curb corruption and make the management of public funds more efficient, effective, and open to citizens. This case study examines the public finance management reforms and additional government actions that served to increase fiscal transparency in the Philippines. 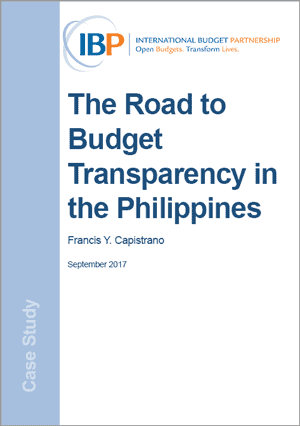